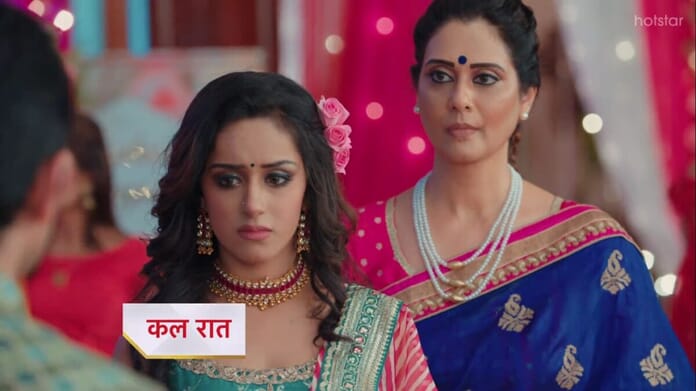 Star Plus show Yeh Hai Chahatein is always on top because of the interesting storyline. The twists and turns of the show have glued us to the screens. Now, Armaan keep failing in his plans of separating Rudraksh and Preesha so it will be intriguing to watch that what going to happen in the future episodes.

In the current episode, Armaan asks Servant to stop the water supply to Preesha’s room for 10 minutes and he enters the washroom and tries to clean Preesha’s face with his handkerchief. She feels uncomfortable and she tries to stop him but he ignores her protests. Sania tries to stop Rudraksh from going to Preesha’s room but she fails.
Rudraksh reaches Preesha’s room and takes her out of the bathroom and helps her to wash her eyes. Then he notices Armaan appreciating the Servant and thinks that what if Armaan want to stop this marriage. Later Saaransh collides with Rudraksh and the red color from the latter’s plate falls on Preesha. Sharda tells them that Rudraksh and Preesha are meant for each other.

Digvijay tells Armaan that the latter’s plan flopped again. Sharda gives sangeet leganga to Preesha. Rudraksh helps Preesha to take it to her room. He tries to kiss her but Armaan enters the room deliberately and apologizes to them. He tells Preesha that caterer want to decide the menu.

In the upcoming episode, Digvijay will say to Armaan that Mehndi ceremony too started so what the latter going to do now. Armaan will ask him to wait and see. Rudraksh will say to Sharda that he got chance to sing again and he will leave from there. Digvijay will tell Preesha to cancel the marriage because Rudraksh disappeared again without informing her.

Rudraksh didn’t inform anything to Preesha? What will be Preesha’s answer to Digvijay?