Star Plus show Yeh Hai Chahatein is always on top because of the interesting storyline. The twists and turns of the show have glued us to the screens. Now, Preesha refused to marry Rudraksh without Anvi so it will be intriguing to watch that what going to happen in the future episodes.

Earlier it’s seen that, Preesha searches Anvi. Digvijay reminds her that she should stay away from Anvi. She tells him that Anvi is attached to her so they can’t let Anvi suffer. He informs her that Sania took the latter’s place in Anvi’s life so the latter need not to worry about Anvi. Later Preesha learns that Rudraksh drank a lot and gets worried about him. Armaan assures her saying that he will go and check Rudraksh. Sania takes Anvi to icecream parlour and asks her to wait outside and she enters the parlour. Few guys kidnaps Anvi. Armaan reaches Khurana mansion and confirms that Rudraksh is sleeping still.

Sania meets Anvi’s kidnappers and gives money to them. He asks them to keep Anvi with them because Anvi should not attend the marriage. Other side, everyone waits for Rudraksh. Armaan suggests to cancel the marriage. Digvijay tells Preesha that Rudraksh is irresponsible always and asks her to call off the marriage. Rudraksh comes there and Preesha hugs him. He murmurs to Armaan that the latter tried a lot to stop him but failed. He reveals that he didn’t drink anything yesterday. Armaan tells him that the latter misunderstood. He tells Digvijay that he has back up plan.

In the upcoming episode, Sania will inform Armaan about Anvi’s kidnap. Preesha will say to Rudraksh that without Anvi she can’t marry him. Vasudha will tell her that they has to wait for 6 months if marriage doesn’t happen today then.

Will Rudraksh support Preesha’s decision? Will they be able to find Anvi? 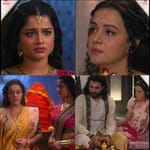