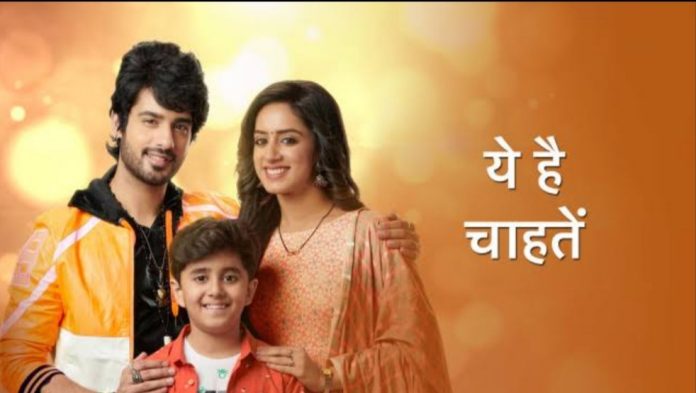 This week Yeh Hai Chahatein begins with Rudraksh tells Bunty that definitely Devika’s friend is involved in Devika’s murder so he need find him first to prove Preesha’s innocence. Anvi refuses to eat food and asks Armaan to bring Preesha. Rudraksh comes there and gives teady bear to her saying that Preesha send it for her then starts feeding her. He gets to know about the company name where Devika did her iinternship from Nanny. Next day, Rudraksh informs Gopal about Preesha’s arrest. Police inspector tells Rudraksh that he can’t grant a bail until he gets any solid evidence in Preesha’s favour.

Gopal asks Preesha to not lose hope saying that everything will be fine. Rudraksh shows Anvi’s video to Preesha and asks her to not worry about Anvi and he will find the murderer too. She hugs him saying that she can’t lose him too, because of that murderer she already lost Devika. He places a kiss on her forehead and tells her that he can do anything for her. Later, Rudraksh finds the list of the people who did internship with Devika and checks them one by one and at last moves towards Harry’s house. Harry sees Devika’s death news on TV and sees Rudraksh too and hides in his house after switching off everything.

Rudraksh enters Harry’s house and accuses him for Devika’s murder. Harry tells him that he didn’t murder anyone. Rudraksh beats him and demands the truth from him. Harry informs him that he met Devika and confessed his feelings to her but she lashed out at him and asked him to leave the room so he left from there. Other side, Armaan struggles to tie his tie and recalls that how Preesha used to do it for him. Anvi tells him that she can do it because Preesha taught her and she misses Preesha so much and asks him to bring Preesha back. He promises to bring Preesha back.

Rudraksh handovers Harry and CCTV footage to Police inspector saying that Harry is Devika’s murderer. Then he informs everything to Preesha and she thanks him for trusting her and doing all this to prove her innocence. He tells her that he is doing for himself because she is his life and hugs her. Armaan taunts them for hugging each other. Preesha reveals about Harry to him. Police inspector informs them that Harry is not confessing his crime and they don’t have any solid evidence against him so still Preesha is prime suspect of Devika’s murder. Rudraksh and Armaan meets the make-up artist of Devika and she confirms that she saw Harry fighting with Devika that day.

Sulochana learns that Rudraksh gathering evidence to prove Preesha’s innocence and she complaints about him to Sharda. Sharda defends Rudraksh and tells her that Rudraksh won’t stay silent after knowing that Preesha is in danger and fate brought them back together again so no one can separate them now. Other side, Devika’s make-up artist points out at one Security guard and that Security guard reveals that he went to Devika’s room that day and saw her fighting with Digvijay. Rudraksh accuses Digvijay. Digvijay reveals that he just met Devika to get her signature for trust fund papers.

Police inspector tells Rudraksh that he need solid evidence against Digvijay to arrest him. Later, Rudraksh informs Preesha about Digvijay and she asks him to not accuse Digvijay. Then he meets the Lawyer who is handling the paper works of Devika’s trust fund and brings him to Thakur mansion. Lawyer reveals that Digvijay used all the cash from Devika’s trust fund except 1lakh and she got to know about this on her marriage day. Armaan asks Digvijay that why the latter betrayed them.

Digvijay accepts that he used Devika’s trust fund and to inform about it he went to meet Devika but she already knew about it and yelled at him so he promised to return her money within a week and she forgave him and asks Armaan to believe him saying that this is what happened that day. Police inspector arrests Digvijay for investigation. Rudraksh and Armaan argues with each other. Later, Rudraksh informs Khurana’s about Digvijay. Sulochana reminds him that Preesha is Anvi’s mother now so she won’t return to him. And he tells her that Preesha will return to him definitely.

Next day, Sulochana taunts Preesha for using Rudraksh and warns her to stay away from him. Rudraksh asks the Police inspector to release Preesha saying that Digvijay would have confessed his crime. Armaan informs Police inspector that Digvijay didn’t murder Devika and he has evidence to prove that. Another make-up artist Komal reveals that she saw Devika and Preesha’s fight that day. Police inspector questions her then he announces that all the evidences proves that Preesha murdered Devika. Rudraksh defends Preesha but she lashes out at him saying that he is no one to her and asks him to not interfere in her matters.

Later, Rudraksh wonders that why Preesha changed suddenly and decides to not back off. Preesha thinks that she don’t want Rudraksh to get hurt because of her. Other side, Vasudha learns about Preesha’s arrest. Rudraksh informs everything to Sharda and asks her that how can Preesha say that to him when she knows that how much he loves her and cries. Next day, Armaan tells Digvijay that he still feels like Preesha is innocent. Digvijay asks him to forget Preesha and she deserves to be punished. Anvi reminds Armaan about his promise.

Laundry guy delivers the sarees to Rudraksh and also gives one hairpin to him saying that it was stuck in the blue saree and Rudraksh shocks realising something. In the court, Vasudha asks Preesha to believe God and nothing will happen to her. Gopal tells Preesha that they hired the best Lawyer for her so she will be released definitely. Ahana learns that her work is almost finished and she informs about it to Mishka.

Rudraksh informs Sharda that Police found evidence in Preesha’s favour. Sharda asks him about the evidence. He tells her that Police found saree piece in Devika’s hand and that don’t match with Preesha’s saree so they are checking the CCTV footage. Sulochana overhears their conversation and checks her blue saree. He reveals that he lied to her and shows the hairpin to her and asks her that why Devika’s hairpin was stuck in her saree and why the latter hided that she met Devika that night. Komal gives statement against Preesha and Preesha’s Lawyer struggles to prove her innocence.

In the upcoming episode, Judge will announce that all the evidence proves that Preesha is Devika’s murderer. Other side, Sulochana will say to Rudraksh that she didn’t murder Devika.