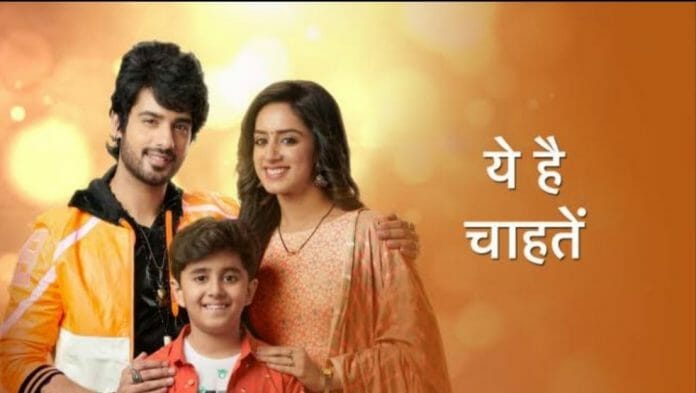 This week Yeh Hai Chahatein begins with Yuvraj notices Ruhi spending time with her parents outside the hospital. He reaches the hospital and complains to Nurse about Rudraksh. She takes him to Ruhi’s room. Yuvraj gets shocked seeing Ruhi there. Nurse scolds Yuvraj for wasting her time. Next day, Preesha smiles seeing Rudraksh and Ruhi sleeping in same way. Ruhi kicks Rudraksh out of the bed while sleeping. He falls down and screams in pain. Preesha smiles seeing that. Ruhi goes to washroom to get freshen up. Rudraksh holds Preesha when she was about to fall. So Yuvraj taunts Rudraksh. Later, Doctor examines Ruhi and gives permission for her discharge. Other side, Sharda prepares breakfast for Ruhi and leaves the house with Bunty. Vaijayanti follows her to know the truth. She enters the hospital and learns that Rudraksh is not admitted there.

Sharda asks Ruhi that if the latter is fine. Ruhi tells her that Doctor said that she is fine and it happened because she ate her food. Sharda sees Vaijayanti and thinks that Vaijayanti should not get to know that Rudraksh is with Preesha and Ruhi. She takes Vaijayanti aside. Vaijayanti asks her that if Rudraksh is fine. Sharda tells her that Rudraksh is fine and she came to meet her friend. Ruhi tells Bunty that she want to stay with Rudraksh. He decides to help her and thinks that he can’t break Preesha’s promise but he can support Ruhi and Ruhi also wants to see Rudraksh and Preesha together. Later, Bunty informs Yuvraj that his car tyre has been punctured. He says that now Yuvraj can’t drop Ruhi and Preesha but Rudraksh can drop them. He recalls that how he punctured Yuvraj’s car tyres. Rudraksh agrees to drop them. Yuvraj says that he will accompany them. But Rudraksh refuses to take Yuvraj with them. Sharda sees Bunty talking to mechanic.

On the way to Rothak, Ruhi tells Rudraksh that Preesha can’t sing well. Preesha asks her to stay silent. Rudraksh tells Ruhi that he knows that. Both starts complaining about each other. Ruhi smiles hearing them. Rudraksh gets distracted while driving and he is about to get into an accident but he escapes at end moment. Other side, Sharda learns about Bunty’s plan and she asks him to not do anything in the future because Ruhi is Yuvraj’s daughter and if Rudraksh gets involved with Ruhi then it will affect everyone’s peace. Vaijayanti hears that and learns that Rudraksh was with Preesha and Ruhi in the hospital. She confronts Sharda. Sharda assures her saying that Rudraksh and Preesha won’t reunite. Yuvraj calls Preesha and informs her that he is on his way to Rothak and asks her about it. She lies to him that she will also reach soon.

Later, Ruhi gets tired so Rudraksh picks her and walks. Then she asks for food. So Rudraksh tries to get mangoes but he could not and Preesha climb the tree and gets mangoes which surprises him. She is about to fall but he catches her. Ruhi smiles thinking that her plan working. Rudraksh asks Bunty to send a mechanic. Bunty tells himself that he won’t send any mechanic and he hopes that Preesha tells the truth to Rudraksh and they realises that they can’t live without each other. Rudraksh informs Preesha about mechanic’s arrival. He says that mango is tasty. Ruhi asks him to thank Preesha because if her mother didn’t climb tree then they would have stayed hungry. They finds water. Preesha goes to arrange food for Ruhi but she falls in a quicksand and screams for help. Rudraksh asks her to not move otherwise she will sink more. She decides to tell the truth to him before she dies but he didn’t let her speak. He saves her and she thanks him.

Meanwhile, Yuvraj reaches Rothak and learns that Preesha and Ruhi didn’t reach home yet. Rudraksh makes fun of Ruhi when she got afraid hearing noise. Preesha pranks him and makes him scream in fear to get revenge for Ruhi. Then Ruhi teases Rudraksh. So Preesha defends Rudraksh saying that he is brave enough to save Ruhi. They finds a hut. Rudraksh breaks the lock and they goes inside. Preesha finds ingredients and she cooks ‘khichdi’. Ruhi asks Rudraksh that why he is keep calling her mother as Preesha when her name is Priya. He tells her that he used to call her mother as Preesha when they were friends. Preesha helps Rudraksh to wear ‘dhoti’ as per Ruhi’s order. Ruhi tells Preesha that Rudraksh don’t know anything and it’s her who used to take care of him when he was staying in their house storeroom.

Next day, they learns that mechanic didn’t repair the car yet so they gets a lift. Vaijayanti tells Sharda that the latter was confident that Rudraksh will return but he didn’t return yet. Sharda calls Bunty and learns about car issue. Bunty gets worried and he leaves for Rothak. Ruhi asks Rudraksh to become her father. Preesha scolds her saying that the latter already has a father. Ruhi asks about her father but Preesha remains silent. Rudraksh asks Preesha that why she is not telling to Ruhi about her real father.

In the upcoming episode, Rudraksh will tell Preesha that he loves Ruhi so much but her face reminds him about the latter’s betrayal. Truck driver will inform them that they will reach Rothak in 10 minutes. Rudraksh will say that he can’t see Preesha’s face for a second also and he will get off from the truck.