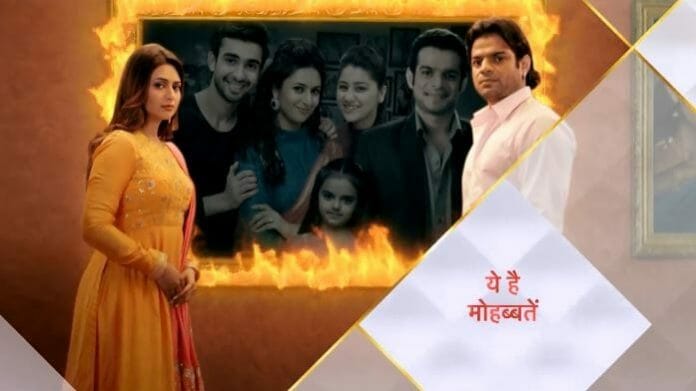 Serial Yeh Hai Mohabbatein is witnessing edge of the seat drama.
Mrs. Bhalla gets a call and the person from other side address himself, as Raman and ask to help him.

Mrs. Bhalla worries for Raman but Simmi and others ask her not to disturb herself over a fake call. Here, Arijit gets to know that Natasha is double crossing him and decides to avenge her.

Now in the upcoming episode will see Arijit will trap Natasha in Dr. Mishra’s murder.
Ishita will get dumbstruck by Natasha’s statement. Meanwhile, Mamta and Arijit will discuss about the plan and Mamta will raise her doubts on Arijit and Arijit will bribe her , Mamta will then ask him to tell about the next step. Here, Ishita will try to convince Mrs Bhalla that the phone call was from imposter, Raman will also try to convince Mrs. Bhalla that he is the real Raman. Meanwhile, Arijit will execute his master plan. Frustrated with doubts over his identity, Raman will lose his cool.

Further, Karan will ask inspector to check Natasha’s house. Mamta will blame Natasha and will say she killed Dr. Mishra. Everyone will get shocked. Later, Bhuvan will call someone and will inform that the idea worked and police arrested Natasha.
What more will happen in the show will be interesting to watch.

Do Natasha will learn about Arijit’s plan? Do Raman is hiding something from the family? Do real Raman is someone else or Arijit is planning against Bhalla’s? Well, to know more keep watching the show Yeh Hai Mohabbatein, Mon-Fri on Star Plus.

Stay tuned with us to read more news, spoilers, written update and latest updates of your favorite TV shows.