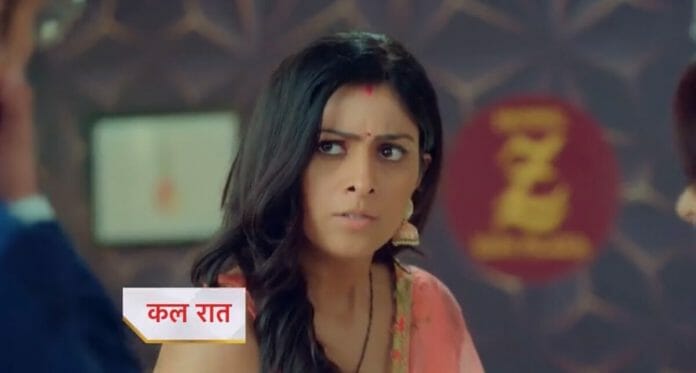 Star Plus popular daily soap Yeh Jhuki Jhuki Si Nazar is all set to serve the audiences with a high voltage drama, along with the ongoing plot.

In the earlier episode, Bhavna ruins Dia’s project in order to take revenge from her. Whereas, the latter gets disheartened but Armaan somehow able to console her. He proclaims to help her and unwillingly talks to Kajal regarding Dia’s project. She reminds him about their past and confesses her love for him. She desires to get united with him, while he gets furious and rebukes her for even thinking about it.

Here, Armaan becomes mad at Kajal and tells about his genuine love for Dia. He warns Kajal to stay away from their life, while Dia hears their conversation and gets shocked learning about Kajal’s truth. She gets furious and rushes to the office, whereas Bhavna gets curious and calls Anju to learn about the matter.

Dia confronts Kajal about her conversation with Armaan and rebukes her for trying to break her house. She breaks all her ties with Kajal and warns her tk stay away from Armaan. She reminds that Armaan have moved on from his past and ask to leave him alone.

Ahead, Jaggi comes in between Kajal and Dia. He shows his support towards Kajal and taunts Dia that Armaan married her only because of sympathy. Whereas, Dia ask him not to interfere. He ignores her warning and keeps infuriating Dia, whereas the latter slapped him.

Everyone gets shocked by Dia’s action, while she gives a last warning to Kajal. Dia gets confronted by her seniors and was asked to apologise to Jaggi, but she denies and tells about how he mistreated her.

Later, Dia again slaps Jaggi while he gives a warning to her. Armaan shows his support towards Dia after getting informed by Ruby and assures that she be fine. Whereas, Jaggi threatens Dia, but she gives a befitting reply to him. Meanwhile, Madhu sees Dia’s video of slapping Jaggi, as it gets viral.

Now in the upcoming episode, Madhu will confront Dia and scolds for her action. She will mock Dia for ruining their reputation and declares that she won’t do any job hereafter. She will point a finger on Dia’s character, while Armaan shouts at her to stop. He will take a stand for Dia and prohibits Madhu from commenting on Dia’s character.

Will Dia be able to fight against Jaggi?

Will Kajal try to come in between Dia and Armaan?