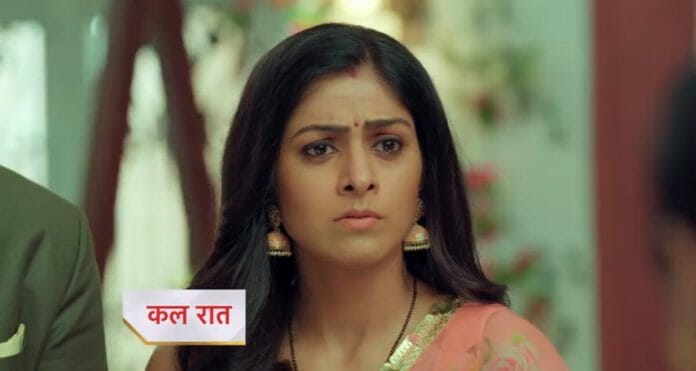 The gripping storyline of Star Plus popular daily soap Yeh Jhuki Jhuki Si Nazar, filled with twist and plots; makes it engaging to the audiences.

In the earlier episode, Dia gets furious at Kajal for trying to come in between her and Armaan. She confronts the latter and rebukes her for it, whereas Kajal acts to be innocent in front of others. Jaggi comes for the support of Kajal and mocks Dia’s look, Whereas the latter gets frustrated and slaps him. Everyone gets shocked and the managers asks Dia to apologise to Jaggi in order to continue her job.

Here, Dia takes a stand for her self-esteem and again slaps Jaggi instead of apologising to him. She quits the job, while Jaggi gives her a warning. Meanwhile, the video of Dia slapping Jaggi gets viral and reaches Madhu. Her friends taunts her for having a characterless daughter-in-law.

Dia gets worried about the concequences for her action, while Armaan shows his support towards her. He says that she has done right and encourages her not never hesitate to take a stand for herself. She shows her gratitude towards him.

Ahead, Palki also supports Dia but Anju gets shocked learning about her decision. She scolds Dia for doing wrong, while the latter gets upset with her mother, but Armaan makes her understand the worry of Anju.

Madhu confronts Dia and rebukes her for slapping her senior. She says that Dia have ruined their image and ask to apologise to Jaggi, but the latter denies to do it. Madhu points a finger on Dia along with Bhavna, whereas Armaan takes a stand for his wife and gives a warning to others.

Later, Dia shares her tension with Armaan and says that she failed to fulfill Sudha’s duty. Meanwhile, Bhavna instigates Madhu against Dia and notify about her past. Madhu gets mad at Dia and prohibits her from doing any jobs.

Now in the upcoming episode, Armaan will make Dia talk to his friend, who tries to help Dia to get a job. She will help Dia to find a job and praises her for her resume. Dia will get elated and questions if she needs any other thing? To which the latter will ask Dia to bring her character certificate from her previous job. Armaan and Dia will get worried.

Will Dia get a job?