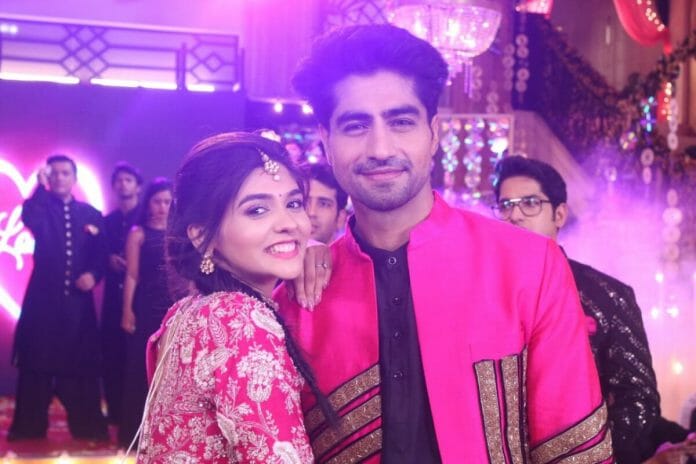 In today’s episode; Panditji ask Akshara to keep her hand on Abhimanyu’s hand. Mahima receives a mail from Chicago conference. Anand gets elated thinking the mail is for them. He gets happy thinking they will go to Chicago. Mahima tells to Anand that the invite is not for them. Anand asks if it is for Harsh and Manjiri. Mahima says that invitation is for Abhimanyu and Akshara. Anand says Akshara isn’t a doctor. Mahima says Abhimanyu might have done some makeshifter. Anand says this is not done. Mahima says it is just a start.

Pandit ji reads the wedding mantras fast. Abhimanyu asks Pandit ji to slow down as it is his first and last wedding, and he wants to live the moment. Akshara adores Abhimanyu. Vansh asks Arohi to find Akshara’s sandal in the meantime. Arohi searches for sandal. Neil goes behind Arohi. Arohi gets stunned learning Neil is wearing Akshara’s sandal. Arohi vows to get the sandal by hook and crook. Ahead, Panditji asks groom’s sister to tie the knot. Manjiri says bride’s sister will tie the knot according to their ritual. Akshara and Abhimanyu sit stunned. Abhimanyu allows Arohi to tie the knot. He asks Arohi to tie knot strongly so that none can break his bond with Akshara. Arohi tries the knot. Panditji calls for Akshara’s parents to do the kanyadaan. Akshara sit teary. Abhimanyu holds Akshara’s hand. Vansh asks Swarna and Manish to perform the ritual. Swarna and Manish gives Kairav an opportunity to perform the kanyadaan ritual. Akshara tells that post losing her parents, Kairav was her mother and father both. She gets emotional. Kairav thanks Akshara for giving him the opportunity. He adds he is lucky to have a sister like her.

Precap: Neel performs a dance for Akshara and Abhimanyu. A couple out there talks with Harsh and Mahima and says it is shocking Abhimanyu’s wife is not a doctor. Akshara over hears the talk.