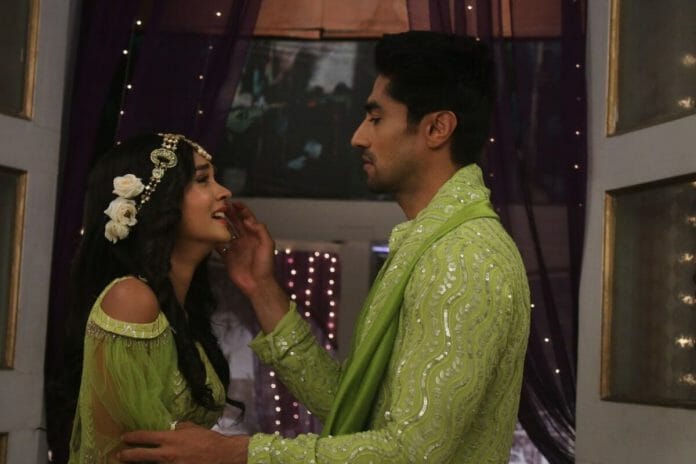 In today’s episode; Abhimanyu says to Manish that wedding was perfect and we all enjoyed. Manjiri side Abhimanyu. Akshara comes with drink, Manjiri asks Goenkas to try the juice made by their daughter-in law. Akshara serves the drink. Neil says to Abhimanyu that post wedding a daughter turns into daughter-in law and boy into son-in law. He says it feels awkward and don’t know how Akshara might be dealing with the situation. Abhimanyu understands Akshara.

Akhliesh asks Anand to join them. Anand, Harsh and Mahima leaves for the meeting. Abhimanyu tells to Goenka’s that staff has arranged a welcome for Akshara. Manish says Akshara is lucky to have a partner like Abhimanyu who is supporting Akshara’s career too. Manjiri says to Goenkas that they are lucky to have Akshara in the house. Abhimanyu shows the section of trophy at the house and wishes Akshara’s win one too. Shefali says to Parth that she look for similar support. Parth says he can say the same.

Ahead, Goenka’s along with Birla’s head to perform ritual with Akshara and Abhimanyu. Harsh, Anand and Manjiri decide upon music department at Birla hospital. Manish wait for Harsh, Anand and Manjiri. Manjiri and Abhimanyu asks Goenka’s to start the ritual without them. Neil brings the twist in the ritual. He and Parth asks Abhimanyu and Akshara to find the ring with a chopstick. Akshara makes Abhimanyu win. Abhimanyu advice Akshara do not sacrifice win to anyone. He says he believes in equality. Manish gets impressed with Abhimanyu’s thought process.

Kairav asks Akshara if she is happy at Birla house. Akshara lies to Kairav. Abhimanyu advice Akshara to start ignoring people like Harsh. Harsh, Anand and Mahima decide to reveal about closing music department later. Goenka’s learn bid adieu to Birla’s. Akshara worry why Harsh, Anand and Mahima isn’t telling the truth. Arohi think Akshara is lucky as she gets everything easily and she has to do the hardwork. Abhimanyu gets excited to visit hospital with Akshara. [Episode Ends]