Today’s episode starts with inspector telling to Kartik that few years back when her child took birth at that time the racket of buying children was very popular. He says he might call him for the investigation too. Naira over hears Kartik’s talk and gets angry on him for trying to scoop the past. Kartik asks Naira to listen to him once but Naira refuses to.

Afterwards, Naira feels sorry for getting angry at Kartik. She runs to meet Kartik but finds him nowhere. There, Kartik decides to find the truth.

Later, Suwarna asks Naira to choose the jewelry and clothes for the upcoming festival. Naira misses Kartik. Kartik comes to help Naira. Naira dreams of getting romantic with Kartik. Back to reality; Naira finds Kartik nowhere. Ahead, Goenka’s gets shocked seeing Samarth’s rude behavior towards Vansh. Vansh cries and Kairav runs behind him.

Meanwhile, Kartik enters Leel’a house and tries to confront her. Here, Vansh cries and says to Kairav that his father is bad. Gayu feels bad for Vansh and Naira takes her. There, Kartik receives a letter from sister Leela’s son.

At Goenka house, Manish questions Samarth why he is getting frustrated. Naira interrupts and says to Samarth he is wrong but none will punish her. Here, Kartik drives fast. Later, Naira says that Gayatri is going to her mother’s house. Samarth says no. Naira says he started doing difference between his both kid and later if Vansh doesn’t give respect to him than they can’t stop her. Samarth realizes his mistake.

Afterwards, Naira receives a letter from Kartik and stands shocked reading that. Naira panics. It was Kartik’s dream. In the flashback Kartik recalls he reads the letter of sister Leela and learns that his daughter is alive. Kartik stands stunned and gets happy too. He further, learns that Leela has given his child to someone else. He finds a photograph in an envelope and gets shocked.

Back to reality; Kartik recalls her daughter is alive. He further decides he will only tell to Naira after finding their daughter. Afterwards, Kartik decides to keep fast along with Naira for Gangaur festival. He hires a detective to find about the photo man. Manish interrupts and asks Kartik what he is restless. Kartik lies to Manish and shares a talk with Manish. At night, Suhasini gets restless. In the morning, Kartik thinks to behave normal. Ahead, Kartik meets detective. Here, Naira meets some lady. (Episode Ends) 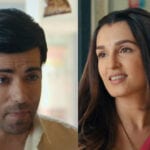 March 3, 2021
Pandya Store 3rd March 2021 Written Update on TellyExpress.com The episode starts with the kids taking the wheelshop. They hide. The government officials come to...