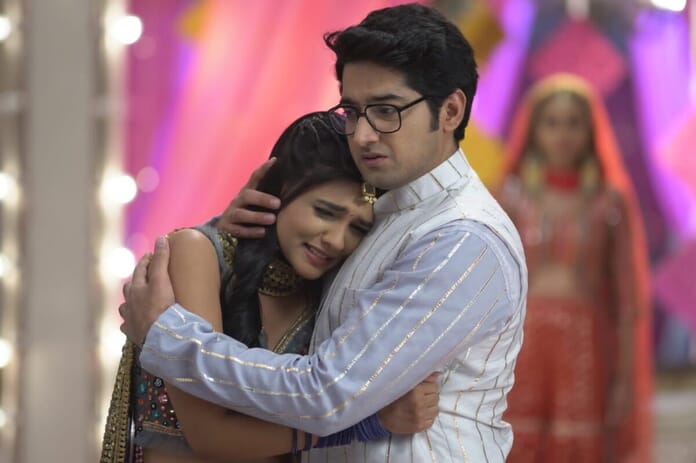 Today’s episode starts with Manjiri asks Abhimanyu if she can say something. Abhimanyu asks Manjiri but she shouldn’t accuse herself. Manjiri asks Abhimanyu if he truly love Akshara than he shouldn’t let her go. She says Akshara didn’t speak anything maybe there is some reason behind her silence. Abhimanyu says he was thinking the same because he can’t understand why Akshara refused to realize his love for her. Manjiri says sometimes a person thinks about other person happiness so much that they do the mistake. She adds Harsh and his happiness equally matter to her. Abhimanyu says he will figure out the reason behind Akshara’s silence. He promise Manjiri that he will fix everything.

There, Akshara meet sleeping Arohi. She applies ointment on Arohi’s wound and recall her moments with latter. Kairav watches Akshara from far. Arohi talks in sleep. She asks Akshara why she snatched from her. Akshara cries. Kairav vents out at canvas. Vansh console Kairav. Kairav says life has always snatched everything from him. He says he can’t see life cheating Akshara and Arohi. Vansh motivates Kairav to fix everything for Akshara and Arohi. Abhimanyu recall his moment with Akshara. He was about to call Akshara but drops the idea. Abhimanyu think about Akshara and says he hope latter is good. He decide to meet Akshara to find his answer.

Next day, Akshara recall Arohi’s word and panics. Kairav console Akshara. Kairav asks Akshara why she was silent when Abhimanyu questioned her. He asks Akshara to tell whats going on in her heart. Akshara says she has decided what she has to do.

Abhimanyu tries to call Akshara and find her mobile off. He says switching-off the mobile is not the solution. Abhimanyu says falling in love was not easy for him and now he will make it difficult for Akshara to move out from this relationship. He decide to meet Akshara.

In the meantime, Akshara tries to cheer Arohi. Goenkas support Akshara to console Arohi. Akshara decide to meet Abhimanyu. Arohi over hear Suhasini and Manish’s talk where Suhasini mentioned that alliance was for Abhimanyu and Akshara and later got confused. Arohi gets heart broken.