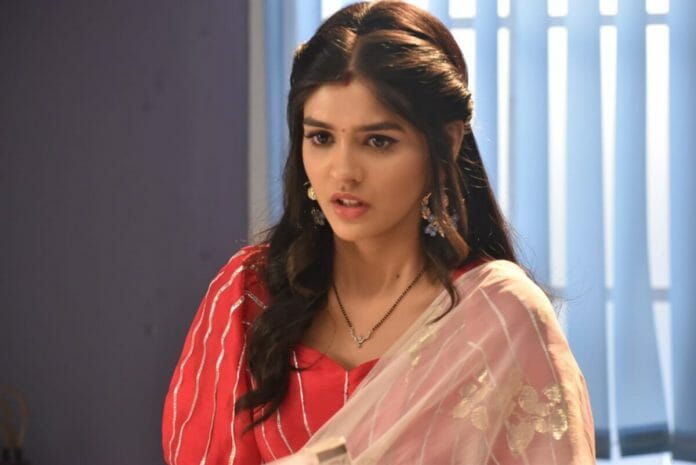 Abhimanyu and Akshara hear a child crying. They run to see him. Mahima tries to cure the boy. Boy’s mother asks Akshara to sing a song like earlier to calm her song. Mahima gets irked. Akshara sing a song. Mr. Bijoria gets impressed with Akshara. Arohi sees Akshara treating a child with her song. Boy’s mother thanks Akshara. Akshara ask her not too.

Abhimanyu praises Akshara. Mr.Bijoria meets Abhimanyu. Abhimanyu introduces Akshara to Bijoria and says he is one of board of the members. Bijoria gets glad meeting Akshara. He talks about CEO position and says Harsh’s place need to get filled soon. Bijoria asks Abhimanyu to think upon it as he is capable enough. Mahima talks with Anand. She says they need to do something before it gets late. Abhimanyu and Akshara walk away. Harsh calls out for Manjiri. He asks her to bring his medicine. Manjiri informs Harsh that his medicines are kept at bed side and water staffs will give. Harsh stand stunned.

Nurse informs Abhimanyu that Suhasini’s blood pressure has shooted up. Akshara gets upset. She gets a panic attack. Abhimanyu console Akshara. Akshara hugs Abhimanyu . Both sleep together. Next day, Suhasini, Akhilesh, Arohi, Manish and Kairav sees Abhimanyu and Akshara sleeping together. Akhilesh click picture of Abhimanyu, Akshara. Both wakes up. Akshara asks Suhasini about her health. Abhimanyu asks Suhasini why she didn’t wake them up. Suhasini says to Abhimanyu that he was sleeping with Akshara like a kid thus she didn’t wake them. She asks Abhimanyu when he is discharging her. Abhimanyu says post few tests. Arohi asks Akshara if she is going back to Birla house or coming with them along as Suhasini is fine. Akshara and Abhimanyu excuses themselves from the place.

Arohi decide to bring Akshara and Abhimanyu’s tiff in Kairav’s notice. She succeeds in her mission. Here, Akshara is perplexed over going back with Abhimanyu. Abhimanyu wishes Akshara comes along. Kairav confront Akshara about her fight with Abhimanyu. Akshara tries to make an excuse but fails. Kairav asks Abhimanyu what he has done with Akshara. [Episode Ends]

Precap: Kairav asks Abhimanyu to tell what he has done with Akshara. He decides to take Akshara along. Akshara says to Kairav that she can take her own decisions.