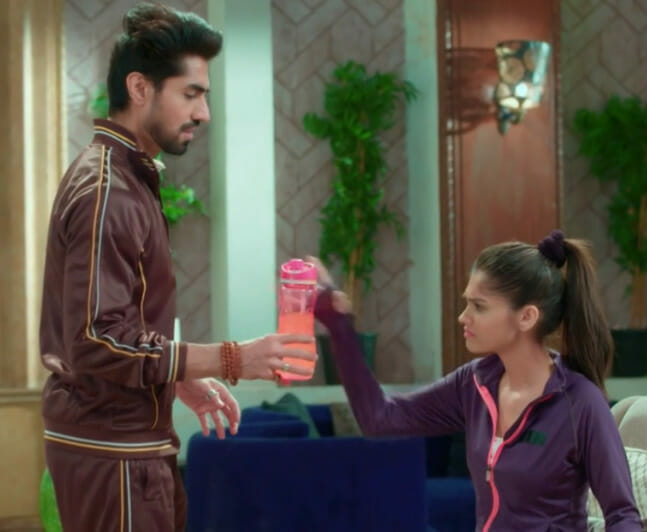 In today’s episode,  Akshara works at office. Her boss tries to get close to Akshara. Akshara asks boss to stay away. Boss says he will make her understand the work. Akshara decide to quit the job. Boss tries to get close to Akshara. Abhinav comes for Akshara’s rescue. He says to his boss that Akshara is his responsibility. Abhinav’s boss says that he will lose job too. Akshara gets a cramp. She urges Abhinav to take her to the hospital. Abhinav helps Akshara. Akshara visit hospital. Abhinav learns Akshara’s real name. Receptionist asks Akshara to fill father’s name as her case is of pregnancy. Akshara refuse to give Abhimanyu’s detail.

Abhinav asks nurse to focus on Akshara instead of insisting her to fill father’s name. Doctor asks Akshara to take care of herself as she will lose her second baby too. Akshara decide to take an extra-care of herself. Manjiri returns home. She sees Neil’s frame. Manjiri accuses AKshara for taking Neil along. Shefali asks Arohi to stop. Abhimanyu asks Arohi what happened. Suhasini and Swarna asks Arohi to calm. Abhimanyu asks Shefali what is the reason for Arohi’s panic. Shefali says she left Shiv with Arohi but he got hurt. She adds Arohi fear she can’t handle the baby alone. Aorhi says without Neil she will not be able to take care of baby alone.

Mahima says to Arohi that keeping the emotion aside she can go for abortion if she feels she can’t handle the baby. Manjiri asks Mahima how even she can suggest something despite knowing Arohi is carrying Neil’s last mark. She asks Arohi to relax as they all are with her. Suhasini suggest for Arohi’s second marriage. She says it is very difficult to raise a child alone. Suhasini says she is well experienced and can feel Arohi’s pain.

Harsh side Manjiri. He says instead of abortion they all will raise a child together. Suhasini, Parth, Mahima tries to make Arohi understand. Abhimanyu asks his family to let Arohi decide if she wants to keep the baby or not. He asks Birlas and Goenkas to give some time to Arohi.

Arohi makes a decision to keep the baby. She says Mahima highlighted a valid point but she got afraid hearing about abortion. Arohi says she can’t lose Neil’s baby. Abhimanyu assures Neil that he will take care of his child. [Episode Ends]