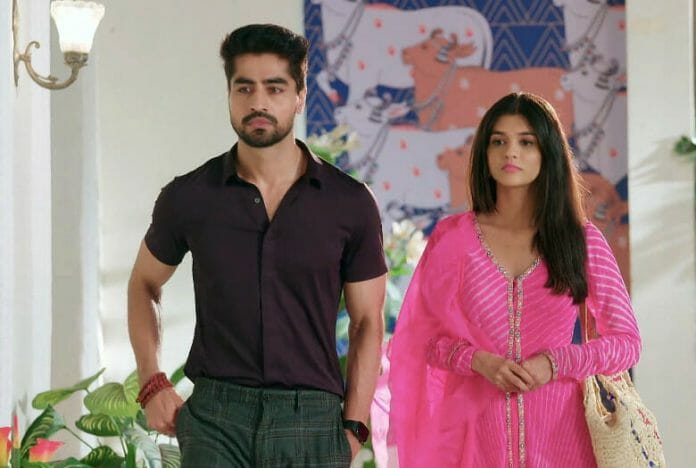 In today’s episode, Akshara says what does 10% stands for only Arohi can tell them. Harsh and Manish asks Abhimanyu and Akshara what is going on. Neil asks Arohi if she is doing 100% drama for 10%. Arohi tries to divert the talk. Rohan leave the place along with other guests. Akshara exposes Arohi’s intention to marry Neil. She tells to Birlas and Goenkas that Arohi wants to marry Neil for power and money. Akshara tells that Abhimanyu helped her in finding papers and exposing Arohi. Abhimanyu side Akshara. Arohi asks Neil to believe her. Neil gets angry on Arohi. Manish asks Arohi what is wrong with her. Swarna regret siding Arohi against Mainsh. Suhasini says to Arohi that she asked her not to break Swarna’s trust. Kairav and Manjiri give an earful to Arohi for cheating Neil.

Arohi claim that she loves Neil. Abhimanyu asks Arohi if she will support Neil if he struggle outside Birla hospital. Arohi stand mum. Neil returns the engagement ring and breaks his ties with Arohi. He asks Abhimanyu why person fail to get true love in return post loving someone endlessly. Akshara and Abhimanyu gaze at each other.

Mahima taunts Goenkas and angry Abhimanyu for calling Akshara bad. Abhimanyu asks Mahima not to worst the situation by her taunts. He defends Akshara and says he is hurt when she speaks ill about latter. Mahima claim Goenkas only give pain to them. Arohi tries to reach Neil. Neil is shattered. Abhimanyu asks Neil to pour his heart out. Neil demand Abhimanyu to bring back Akshara home. He asks Abhimanyu not to lose Akshara. [Episode Ends]

Precap: Mahima says to Abhimanyu that Akshara don’t love him. Akshara is perplexed. Abhimanyu meets with an accident.