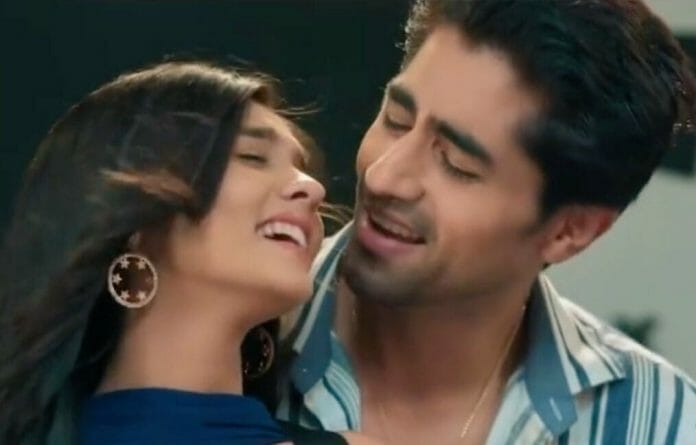 In today’s episode, Akshara on call asks someone to send the flowers soon. Abhimanyu helps Akshara to wear anklet. He gets smitten seeing Akshara. Akshara runs post Abhimanyu tries to get romantic with Akshara. Akshara leave the place. Akshara and Sefali help Anisha to get ready. Akshara gets suspicious seeing Anush giving signal to someone. She stands confused. Manjiri talk with Mahima and says Anisha gets the happiness of her life. Mahima says she just want today’s function to get over easily. She says she wish Akshara be able to handle everything. Manjiri says to Mahima that Anisha’s function is everyone’s responsibility. Mahima says but Akshara’s more as she is from both the side. Manjiri stands worried.

Akshara think what Anisha is hiding. Anand calls Abhimanyu and Akshara. Harsh inform Abhimanyu and Akshara that Kunal will pay his visit soon. Abhimanyu hugs Harsh. Manjiri and Akshara, along with Birla’s stand stunned. Akshara hugs Manjiri. She shares her happiness with Abhimanyu. Neil and Parth inform about Goenka’s. Akshara stops Goenkas. She puts them on gun point and asks them not complaint about anything. Akshara warns Birlas as well. Abhimanyu thanks Akshara for lightening the situation. Akshara spots Anisha leaving the place. Mahima asks Akshara to bring Anisha.

Akshara spots Anisha talking with someone. Abhimanyu share a talk with Kairav. He asks him to remember his words. Kairav assure Abhimanyu. Birlas and Goenkas look for Akshara and Anisha. Abhimanyu call Akshara. Akshara avoid Abhimanyu’s call. She informs him that she will be back soon. Akshara looks for Anisha.

Anisha confront Akshara. She asks Akshara if she was chasing her. Anisha accuse Akshara for doubting on her. Akshara says to Anisha that she is taking her intention wrong. Anisha accuses Akshara. Akshara says to Anisha that if anyone is bothering her than she can take Parth, Neil or Abhimanyu’s help. Anisha accuse Akshara. Abhimanyu asks Akshara and Anisha what they are doing outside. Anisha says she was planning surprise for Kairav but Akshara doubt that she will run again. Abhimanyu asks Anisha to go inside.

Akshara clears to Abhimanyu that she didn’t accused Anisha. Abhimanyu asks Akshara to forget and gear up as Kunal will visit anytime soon. Akshara hugs Abhimanyu. Mahima asks Anisha where was she. Suhasini asks Anisha if she don’t know bride should not go out alone. Akshara covers up Anisha.

Precap: Abhimanyu worry if Kunal will also declare that his hands can’t be cured. Kunal checks Abhimanyu. Akshara prays for Abhimanyu’s hand. Kunal tells to Abhimanyu that his hand can be cured and there is 99% chances about the same.