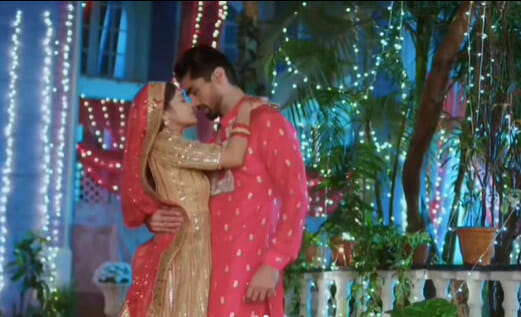 Mahima says she don’t have a talent to hide and simply move on from Anisha’s death. She cuts Akshara’s advice. Akshara hugs Mahima. She asks Mahima to come out from her guilt. Akshara says Mahima is keeping burden on her heart so much that in anger she is not able to move on. Anand, Abhimanyu asks Mahima the same. They side Akshara. Manjiri asks Mahima to make a fresh start so that they can be happy together like before. Mahima leave the place. Akshara asks Birlas to give time to Mahima. She further asks Shefali to forgive Parth. Shefali decide to focus on Akshara’s welcome. Neil tells to Akshara that her stuffs are send to the room. Akshara and Abhimanyu walks to their room.

Abhimanyu says to Akshara that room is waiting for them. Akshara and Abhimanyu enter the room together. Akshara sees the room. Abhimanyu tell to Akshara that he has arranged the room according to her choice. Mahima recall Akshara’s word and cries holding Anisha’s picture.

Abhimanyu shows lipstick organizer to Akshara. He asks if she hit century with the lipsticks or not. Akshara says she has only 5 lipsticks now. Abhimanyu gets sad. Akshara and Abhimanyu get interrupted by Manjiri. Manjiri alerts Akshara about hurting Abhimanyu for the second time. She asks Akshara to start doing things about Abhimanyu as latter has done much for her. Akshara think Manjiri was not sounding good. Suhasini calls Akshara and boosts her morale.

Suhasini and Swarna talk about Arohi. They think Arohi don’t deserve Birla’s. Arohi gets adamant to make her place in Birla house. She hatches a plan.

Akshara and Abhimanyu get romantic with each other. [Episode Ends]