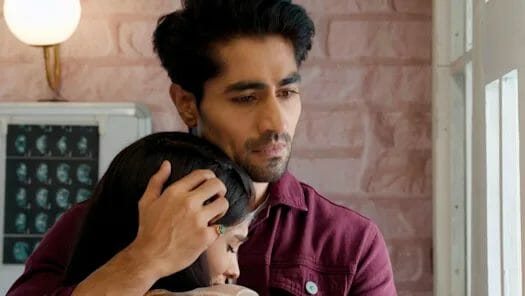 In today’s episode, Kunal says he should take a leave and decide to meet Abhimanyu other day. Akshara asks Kunal if check-up can’t happen today. Kunal says they can do today but Abhimanyu might be tired. He says it will be fine if they do diagnose other day. Mainsh says to Kunal that they called him for Abhimanyu but he got stuck in family function. Anand decide to do the diagnose set up at Abhimanyu’s cabin. Kunal get shocked when Anand decide to send Abhimanyu at sharp 10 AM. He asks Birals if they aren’t going to celebrate Rakshabandhan. Anisha says Abhimanyu’s hand is priority and they can celebrate Rakshabandhan later. Neil says it is first time someone is giving so much importance to Rakshabandhan.

Kunal says it is a purest bond of sister and a brother. Manjiri thanks Kunal for deciding to help Abhimanyu. Manish add he left surgery but he is back for Abhimanyu and they can’t be glad enough. Manjiri says Kunal is not less than a God for them. Kunal asks Manjiri not to call him God and let him be a human. He adds God can never be selfish but human turns sometimes. Kunal asks Abhimanyu to rest well. He compliments Akshara for her singing. He says he heard a melodious voice after so long.

Abhimanyu and Akshara talk. They get excited thinking once Abhimanyu’s hand will be fine he will rush to the OT. Both gets excited. Manjiri talk with Harsh and says Kunal is a good man. Harsh says he didn’t even talk about fee. He says he is happy for Abhimanyu he is back to do surgery. Manjiri corrects Harsh and says it is Akshara’s effort that made a way for Kunal. Harsh agree with Manjiri. Manjiri and Harsh decide to keep a fast for Abhimanyu post he will get fine.

Akshara bump into Anisha. Akshara recall Anisha meeting with someone. Anisha diverts Akshara’s mind and says Abhimanyu’s positive result will be her best Rakshabandhan gift. She asks Akshara if she need anything as she is going out with Manjiri. Akshara stand mum.

Precap: Akshara spots Anisha talking with her boyfriend and gets shocked.