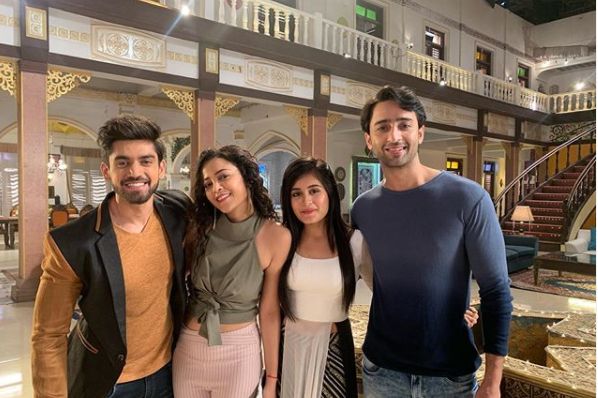 Today’s episode starts with Kunal trying to help Kuhu in wearing her dress. He gets romantic with her. Kuhu blush away. Kunal and Kuhu decides upon baby’s name. Kunal asks to call baby ‘Kunal’. Kuhu says one ladako chokro is enough. Kunal says he don’t fight a lot. He then realizes he accepted he is ladako. Duo laughs. There, Mishti spends time with baby. Abir asks Mishti to get ready. Abir talks with baby and decides his name. Mishti comes and Abir gets smitten seeing him.

Abir and Mishti gets romantic and baby cries. Abir says now baby is here to put break on their romance. Mishbir laughs. There, Ketki and Kaushal come for the dandiya night. Nidhi gets happy. Ketki asks for baby. Mihsbir bring baby down. Mishti prays to Goddess Durga to unite Abir and Meenakshi today.

Further, Meenakshi sees chandelier falling. She saves baby and Mishti. Abir and others worries for Meenakshi. Doctor checks Meenakshi and asks family not to panic. Meenakshi gets the conscious. She asks for baby and Mishti. Kuhu tells her that they both are fine.

Here, Kunal, Parul and Mishti try to make Abir understand to accept Meenakshi. They try to convince her. Abir refuses to listen to any. There, Meenakshi says it’s her Karma that Abir don’t come to see her.

Late that night, Abir along with baby goes to check Meenakshi. He sees her from far. In the morning, Nanu comes and everyone gets happy. Nanu asks for Meenakshi. Meenakshi gets teary while meating Nanu. Ahead, Nanu gives baby to Kuhu. Mishti asks Kuhu if she has decided baby’s name or not.