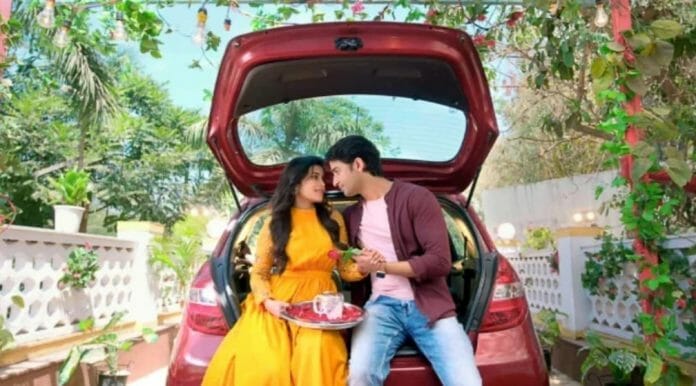 The episode starts with Kuhu coming in front of Kunal wearing a white long shirt. “Humma humma” plays. Kuhu gets cozy with Kunal who goes on bed removing his jacket. Kuhu goes on bed too. They dance and then lie down but just then Kunal’s phone rings. He sees that it’s Meenakshi who is calling and says that he forgot to tell her that he wouldn’t come to the office. Kuhu tries stopping him but he goes away with his phone. On the other hand Abir and Mishti are about to kiss when Kunal and Kuhu come interrupting their romantic moment. Kunal says that he is going home. Abir guesses that Meenakshi must have called him and said that she is not fine since she can’t bear that Kunal took a decision on his own. Kunal says that it is nothing like that since there is an important office work to do.

According to Mishti, Meenakshi is saying the truth only and there must be an important office work so Meenakshi is calling Kunal but Abir says that she could have handled it herself if this was the case but she just wants to control Kunal. Kuhu agrees with Abir and says that Meenakshi is still upset because they made Parul unveil the logo. Kunal says that he knows she is upset but she doesn’t throw her anger on work.

Abir refuses to go anywhere. Mishti and Kunal try making him understand but he doesn’t want to keep listening to every unreasonable wish of Meenakshi like they do every time. He says that they have two options: let the trend continue or make Meenakshi understand that there is nothing wrong in calling “mother” the real “mother” in front of world. Kuhu says that she is with Abir and that they must show rebellion.

Mishti asks both of them to calm down and suggests to go home and if there won’t be any important work then Abir can talk to Meenakshi.

However, Abir doesn’t agree and says that he is going to call Meenakshi right now. Kunal takes his phone. Abir says that they won’t go home. Kunal says ok but they will decide together what to say to Meenakshi. Mishti agrees with Kunal and says that nobody shall call Meenakshi until they don’t decide. The four agree.

Meanwhile Kaushal says to Nanu that he didn’t mean that Meenakshi cannot handle the project alone but he wanted to tell Meenakshi that she is the one who have taught Kunal too, he is intelligent so they should have taken decision together. Nanu asks Kaushal to stop stressing about Meenakshi and relax. He says that he knows Meenakshi is very angry and he isn’t even taking her side but Meenakshi needs some time to accept the truth since for him Kunal came even before Abir and now she must be feeling like his love has been divided.

Parul comes and agrees with Nanu saying that Kunal must stay near Meenakshi but he has gone to holiday. Nanu asks her not to worry since they are gone just for a day and tomorrow they will come back and everything will be back to normal. Kaushal says that it why they messaged Abir asking him not to pick up Meenakshi’s calls. Parul says that she will call Mishti and ask her when they will be coming back.

Meenakshi comes there and scolds them since she was worried since morning about Kunal and everybody knee that he has gone on holiday with his wife except her. She says that she controls the family, the mistake is hers maybe but she is handling business also and that business gives money to the house so they should have thought about it at least. She taunts Parul. She says that she is has been taking the responsibility of everyone since years. She calls Parul outsider and is furious. Parul says that she will call Kunal but Meenakshi asks her to leave it. Parul cries. Nidhi comes and says that she knows she shouldn’t talk like this with Meenakshi whose BP and tension increase. She takes Meenakshi to have dinner. Meenakshi taunts Parul one last time before leaving.

Mishti tells Kuhu that she shouldn’t have talked like that about Meenakshi in front of Kunal and Abir since she is their mom. Kuhu says that she isn’t Kunal’s mother and she just wants them to regret coming in the resort. Mishti says that she isn’t disagreeing with her but saying stuff about her isn’t right. Kuhu asks her why she is behaving like Meenakshi’s lawyer and leaves aftsr saying that she wants to become Mishti the great again. Mishti messages Ketki asking if everything is fine at home. Nidhi is serving food to Meenakshi and Ketki. She goes to take rice. Meenakshi asks Ketki to bring water for her. Ketki leaves. Meenakshi takes her phone.

Just then Mishti calls and Meenakshi picks the call up. Mishti asks how is everything at home and says that Abir is very upset and doesn’t want to go back home. Meenakshi apologizes for disturbing them. Mishti asks sorry since she thought that it was Ketki. Meenakshi says that she is sorry for ruining their holiday but she needs Kunal to come to sign a contract for an important project but if he doesn’t want to come back then she can cancel the order. Mishti says that she will talk with Kunal and asks if he can come back to resort after signing papers. Meenakshi says of course.

Mishti thinks that once all the formalities are done, Kuhu and Kunal can come back and Meenakshi won’t get angry too. Meenakshi says that Kunal and Kuhu will come back home because of Mishti so they will get upset with her only. She thanks Mishti for helping her.

Kuhu refuses to go anywhere. Mishti says that Kunal just has to sign a paper since Meenakshi needs it to start a project. Kuhu is stubborn and says that if they go back home then they all four will go or else nobody. She blames Mishti for creating problems and then solving them.
Kuhu and Mishti start arguing a lot. Abir and Kunal don’t know what to do. Kuhu says that Mishti just wants Kunal to work while she will chill. Kunal asks her to shut up and go to pack her stuff. She leaves.Abir tells Mishti that Meenakshi has won. Mishti says that Kuhu was talking nonsense about Meenakshi. Kunal asks them to stop arguing and says that he and Kuhu will go back home and then come back after signing the papers. Abir says that all four of them will go home but Mishti refuses to go anywhere with Kuhu. She leaves. Abir and Kunal look at each other. (Episode ends)

Precap: Abir asks Mishti to stop being stubborn just to prove herself right. He says that he feels like he is talking to Meenakshi. Mishti says that she isn’t really able to understand him. She refuses to go anywhere but Abir says that he will go because his brother is leaving. The next morning Mishti asks the guard if a car has left from there. He tells her that three people were in it.