Episode starts with Kuhu is acting in front of her family members to talk with Kunal over the phone. She behaves like she is demanding a costly and glamorous gift from him in against of him not being able to appear at Maheshwari house to pick her up as per the ritual. She cuts the call and inform the family member that Kunal is busy in office work, hence he will not be able to come here. She says that he ask me to go back home on my own and behaves like it’s a normal affair. Mishti on the other hand is out of the house for a walk, she tries to call Abir when a person on a bike with his face covered with helmet snatched her phone.

She runs behind that mysterious person and decides to take the phone by hook or crook from him. she says to herself that that phone contains a lot of pictures of mine and Abir and I can’t lose that. Kuhu on the other side is upset about the fact that Kunal didn’t turn up to pick her up. Here in the Rajvansh house, Parul is getting worried about Kunal and Kuhu, she thinks why they didn’t reach home yet. Kuhu comes home on her own and she brought a gift for Ketki. On the other hand, Kunal reaches Rajvansh house and he feels maybe by now everyone is aware about what happened. He says I will face everyone but will not stay with Kuhu.

Mishti locates the bike but it was empty, she sees no one around when in rear glass she sees a reflection of a person. She brings out the pepper spray from her pocket and is about to spray on her when that person drags her down and both gets rolled on the ground in dust. Mishti uncovers his face and that person turns out to be Abir. She gets surprised and ask him why did you do this? Abir gets up and brought her to a place where he arranged a date for her.
A beautiful place besides the lake decorated with white decorations and lights and also long curtains are there too. All in all the place is looking beautiful and eye soothing.

Mishti gets happy and she told Abir that she is in fear that due to her refusal of coming for date, he must be angry with her. Abir says I tried but it didn’t really helped me out. Here in Rajvansh house, Yashpal gives Kunal some hard words for not going to pick Kuhu up. Kunal asks Kuhu to come in the room as he has something important to talk. Kunal comes in the room and sees a cake was kept on the table and it is decorated. He asks about all these when Kuhu says it was for my celebration of completion of one full day of marriage as the last 24 hours is so important hours of my life and I wanted to celebrate them.

Kuhu and Kunal gets into an argument where Kuhu ends up blackmailing Kunal that if he tries to spoil things for her then she will tell everybody that he has got some physical problem and this is why Swetha , Mishti all left him and now she is doing the same.
Mishti and Abir spent some time together where Abir tells Mishti that for entire world she is a gutless and timid girl, but in front of him only she is violent and angry thief. Mishti says I don’t have to prove anything to anybody but still if I have to prove something then what will you ask me for? Abir says it is beyond your limits and let’s drop the topic. she keeps on insisting him to tell her what he wants her to do? Abir asks her to confess in front of the whole family that she loves him. Mishti told him that I know you are doing this to instigate me but just to prove to you that Mishti Agarwal can do anything I will accept your challenge.

Precap : Both the families are in Rajvansh house for celebrating janmashtami. Kuhu Kunal and Abir Mishti are dancing together. Mishti went for dahi handi ritual but due to a conspiracy she fell down and gets unconscious. Abhi comes and saw her in such a state. 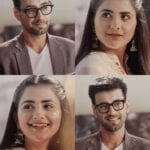 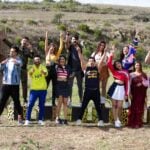 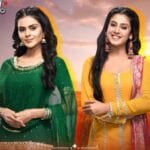