Star Plus popular show Yeh Rishtey Hain Pyaar Ke is now high on drama with Abir’s decision of leaving Rajvansh house after the wedding. In the upcoming episode, Kunal will meet Mishti while she was jogging and will blame Mishti as always and ask her leave Abir. Mishti will tell him that she is not selfish in her love. If Abir will be happy without her she would have left him long ago. Mishti will tell Kunal that due to his selfishness, Abir has taken such a decision. Abir will not be happy living alone but he will manage because Kunal is not supporting him and force him to choose between him and her. She will leave with a parting shot saying Abir doesn’t deserve a brother like him.

Parul will console Meenakshi and tell her its time to tell Kunal about the secret they hid for so many years. Meenakshi will get angry and denies. She will say it’s true she doesn’t give birth to them but she loves both of them equally. Meenakshi will call Mehul and ask him to meet her in the office.

Mishti will come to the market nd seeing Abir and Mehul buying new things for the house will tell him she is not happy with this decision and ask him time. Abir will agree. Later Mishti will share her concern with Badima who will advise her to talk to Meenakshi. Mishti will hesitate as she hates her however Badima will tell her to try her best.

Mehul will meet Metallica in office and boast about his victory in separating her and her son. Meenakshi will ask him what he needs and he will say he wants all the properties in his name in return for her son. Meenakshi will feel disgusted for him for using his son to trade. Mehul will say he didn’t come back for his son but for the money. It is only because of her fraud accusation and police complaint that he lived in poverty for the past 20 years and now he wants all. He will ask her to keep the papers ready and through Mishti Meenakshi will get his son back as she is the only one who can convince Abir.

Mishti comes to Meenakshi’s office and sees Mehul and Meenakshi inside. She will hide quickly on seeing them come out and will overhear Mehul saying to Meenakshi that he hopes she realized she is wrong and wonders what is it about.

Stay tuned for more updates and keep watching the show to know more. 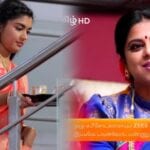