Episode begins with Meenakshi and Parul come inside the Rajvansh Sadan where the Maheshwari family already is present and Mishti comes forward upon seeing them.

She took blessings from Meenakshi and Parul both and Meenakshi says I hope God gives you strength to bear the pain of all sorts. Meenakshi says to Parul, Mishti doesn’t know all the happiness of her is short lived. Parul says Abir loves Mishti so much and he will not do anything like this. Meenakshi says then you and Kunal have to leave the house. Kunal comes inside with Abir and he is so cheerful for his brother.

Abir comes and sits with Mishti for the veneration to start, the priest starts to chant the holy mantras for their marriage. Abir is continuously looking at his mother and his brother Kunal. suddenly he gets up and says to his mother that what you are asking me to do, I can’t do that. Meenakshi says you are going to propose your own mother? Abir says after a long time Mishti learns to keep hope in people and in relationships. She finally starts to believe in this dynamics of relationships and she is counting on our relationship so how come I broke her heart? Kunal tries to ask his mother what is happening when she throws away his hand and says I am not your mother. Everyone in the house is taken aback by the statement of Meenakshi India’s Pal tries to make her realise what she is saying. Abir tries to stop Meenakshi but she goes on and on and says if you love your step brother Kunal so much then you have to leave this girl Mishti.

Kunal doesn’t understand what is happening around him and he says what are you saying? Meenakshi says I am saying the truth neither I am your mother not Abir is your real brother. You are just a mistake of Mehul and a living example of his betrayal to me. Listen to me clearly you are the son of Mehul and his illegitimate affairs with your mother Parul. Today I am going to throw out both mother and son from my house because I am tolerating you both from long. Abir tries to stop her but she doesn’t stop and she throws out Parul of the house. She even asks Kunal to get out from the house as well. Abir shouts for his brother and realises it is all his imagination and he is hallucinating. The priest completed the rituals and puja for the day. Mishti and Abir stands up together and Mishti shows a paper to everybody and gives it to Meenakshi and says this is a permission letter from now on if it has to go out somewhere in he has to take your permission before one week. Everyone is praising the efforts of Mishti to keep Abir attached with his mother.

Meenakshi asks Kunal to come with her as she has some important talks. Abir gets panicked and he shouts in anger suddenly. Mishti looked at him with wide eyes and he starts to blame Mishti for whatever happened regarding his father Mehul Kapadia. Mishti tries to tell him the real truth but he desperately doesn’t want to listen to her and keeps on blaming her. He says I don’t trust you you only love yourself and you didn’t consider anybody else for that. Mishti ask him are you drunk or possessed by any means because whatever you are saying is not making sense to me. You have already said so many things to me in your anger. Abir says the thing is very simple that I don’t want to go ahead with this alliance. Mishti is shocked with his words while Abir torns the card of their marriage and goes up and Kunal is taken aback with the entire thing that took place. Mishti tries to talk to Abir but Vishwambhar took her out of Rajvansh Sadan. Meenakshi had a victory smile on her face.

Precap : Mishti says the relation is between both of us so calling it off can’t be your own decision. You have to say that you don’t love me looking into my eyes. 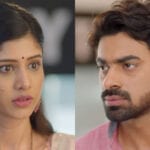 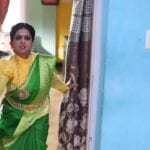 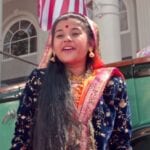