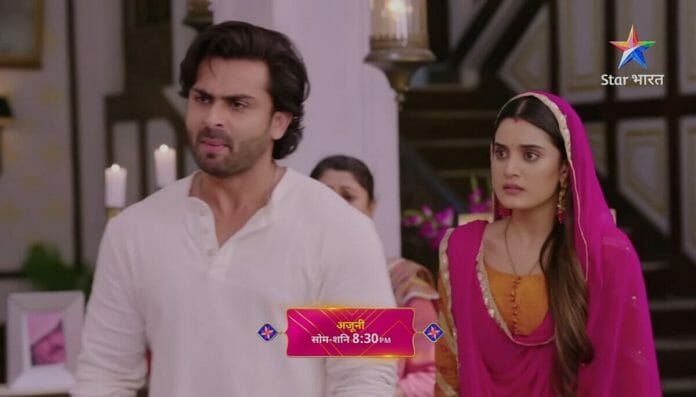 Shoaib Ibrahim and Ayushi Khurana starrer Ajooni is Star Bharat show. This show is about how, despite coming from a middle-class family with strong family values, Ajooni is compelled to marry the guy she despises the most. Now, Rajveer tries to find proofs to prove Ajooni innocence so it will be intresting to watch that what going to happen in the future episodes.

In the current track, Ajooni questions Rajveer. Rajveer tells her that Harvinder crossed all the limits so he got rid of him. She says that she know he is lying. He tells her that he found proofs against her so he put his wristband there deliberately. Harman overhears their conversation.

Ajooni makes Rajveer believe that she is innocent. Rajveer leaves the house to bring proofs to prove Ajooni innocence. Aman expects that Harvinder will come and she cooks for him. Harman and Ravinder tells Aman that Harvinder won’t return. So Aman scolds them. Harman tells Ravinder that Rajveer took the blame on himself to save Ajooni.

Ravinder scolds Ajooni for not confessing her crime when he was beating Rajveer. She tells him that both she and Rajveer are innocent. Rajveer learns that Shikha’s phone found near Harvinder’s jeep. Ravinder keeps an apple on Ajooni’s head. He points a gun at her.

In the upcoming episode, Rajveer will tell Ravinder that he is going to finish the latter’s drama.

What Ravinder will say now? What Rajveer will do now?