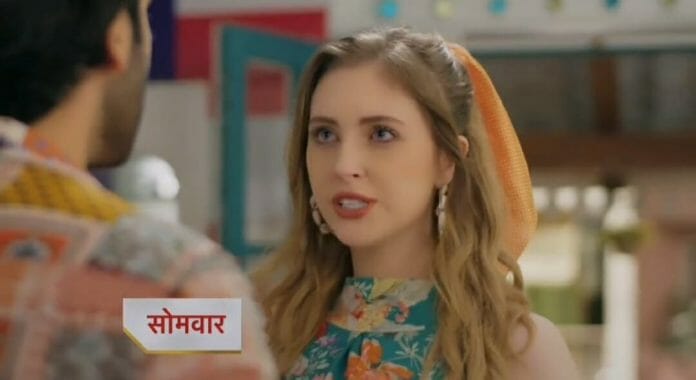 Star Plus popular daily soap Anandibaa Aur Emily have garnered a huge amount of audience. The gripping storyline filled with twist and turns makes it engaging to the viewers. Previously, Gunjan recorded the confession of Aarav after injecting him with truth serum. She showed the video to Emily and the latter gets shocked finding about his motive.

She decided to leave the house but then saw the full confession video, where he told about his growing feelings for Emily. The latter expressed his love for Emily, while she reconciled with him.

In the current track, Gunjan and Pinky becomes furious as their plan gets flopped. Anandibaa also gets disheartened as she wanted Emily to go out of their house as well as Aarav’s life. Meanwhile, Gunjan and Pinky talks about how they ployed against Emily but in the last moment everything got spoiled.

Here, Gunjan’s son Teni records the video against Gunjan and Pinky. He decides to give it to Anandibaa, while both the sisters gets shocked. They tries to stop him but he gets successful in giving the phone to his grandmother. The latter was about to see the video, but Emily stops her.

Emily removes the phone and ask Teni to focus on his studies, while Gunjan gets relieved. Meanwhile, Anandibaa plans a ritual for Moti Baa and tries to feed the food to crows. Emily expresses her fear of ghosts, while Gunjan decides to use it against her.

Ahead, Gunjan tells her plan to Pinky and made her dress like scarecrow. She instructs Pinky to fly away all the crows, so that the ritual will get incomplete. She plans to scare Emily.

Jaman confronts Aarav about his true feelings for Emily, while the latter replies that his feelings started growing towards her, but he still is more drowned towards his dream to visit America.

Later, Anandibaa gets worried as she couldn’t able to see any crows. She recalls Moti Baa’s words and becomes scared. She notify other also about it, while Emily ask her not to talk about ghosts in front of her and goes inside her room being afraid.

Now in the upcoming episode, Pinky and Gunjan will try to scare Emily. The latter will get afraid as she experiences all the paranormal activities created by both the sisters. Whereas, Pinky will get dressed up as a ghost and ask Emily to leave the house.

The latter will shout in fear and everyone gets concerned. She will tell about her ghost encounter and says that it seems to be Baa’s spirit. Meanwhile, Anandibaa will discuss about it with Gunjan, to which the latter tells that maybe Baa is angry that Aarav got married to an American girl.

Will Gunjan gets successful in her ploy?

Will Anandibaa falls into Gunjan’s trap?