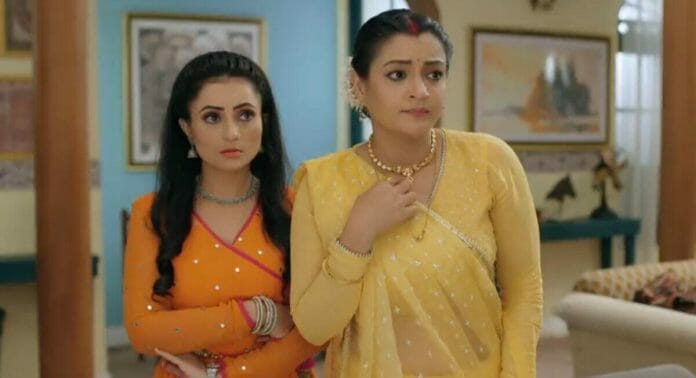 The gripping storyline of Star Plus popular daily soap Anandibaa Aur Emily, filled with twist and plots; makes it engaging to the audiences. Previously, Gunjan succeeded in her cunning ploy and trapped Emily in it. The latter tried to save Anandibaa’s life but instead broke her restrictions.

Anandibaa lashed out at Emily and gave her a severe punishment, but Aarav somehow saved her from it by proving her innocence. But, Anandibaa gave another punishment to Emily and decided not to talk to her.

In the current track, Aarav gets relieved as he gets successful in convincing Anandibaa. He becomes happy as Emily won’t leave him and go back to America alone. He determines to visit America as soon as possible and waits for his visa to come.

Here, Emily gets impressed by Aarav and misunderstands that he loves her. She plans a surprise for him in order to thank him. She takes him upstairs and then opens the blindfold. She makes him sit and tells about her experience in America.

Emily feeds American food to Aarav while he gets elated and enjoys his time with her. Meanwhile, Gulab tries to fulfill Parimal’s task and instigated Aagya to slap him, but again gets unsuccessful.

Ahead, Anandibaa indirectly tells Emily to notify Gunjan about filling the form for sweet dish competition, while the latter notify it to Gunjan and Pinky. The latter gets a devious ploy to throw Emily out of the house.

Gunjan convinces Emily to fill the form and lies to her to write daughter-in-law’s name. Afterwards, she pretends to be shocked in front of Anandibaa and tells about Emily’s mistake.

Later, Anandibaa gets furious at Emily and tells about the importance of competition for her. She proclaims that because of Emily she will loose the competition, while the latter decides to take part, as well as win it in place of Anandibaa.

Now in the upcoming episode, Anandibaa will get furious at Emily and declares that the latter have challenged her. She will proclaim that if Emily fails to win the competition and if their family’s name gets spoiled due to her, then the latter will have to bear a severe punishment.

She will state that she will throw Emily out of the house instantly, while the latter will ask if she wins the competition then will Anandibaa permits her to enter the kitchen?

To which the latter will agree. Anandibaa and Emily will start their challenge, while Gunjan will stare at them.

Will Emily be able to win the competition?