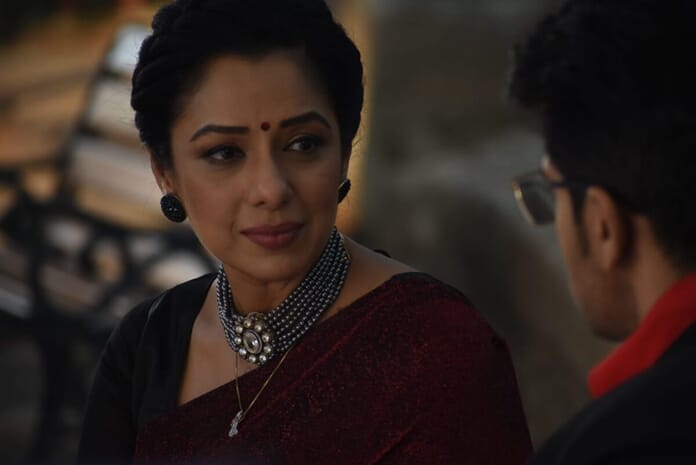 In today’s episode; Gk, Anuj and Malvika laughs. Anupama come and informs them that she is going back to her house. Anuj says to Anupama that his belong to her too. Anupama says Anuj is fine and she should leave now. GK says he wants to stop her but not getting the appropriate reason. Anupama says to GK that she will keep visiting them. She adds she has cooked see-off food for them. Anuj tries to stop Anupama.

There, Nandini says if everyone is excused than why not Kavya. Samar says because Kavya is wrong. Nandini says Vanraj is equally wrong but Kavya is always accused. She adds Anupama only support Anuj and his family. Samar says because Anuj and Malvika is far better them Kavya. Duo argues with each other. Samar asks Nandini to rethink before getting hitched with him. He claim Kavya has mind washed Mavika. Nandini and Samar separate their ways. Leela is perplexed about sharing Samar and Nandini’s fight amid Vanraj and Anupama.

Malvika tries to stop Anupama. Anupama asks Anuj, GK and Malvika not to stop her else society will talk on her back. Malvika asks Anupama not to talk about the society. Here, Pakhi wait for Anupama’s call. Paritosh asks Pakhi why she is waiting for Anupama’s call. Pakhi share about her dream of doing higher studies at USA. Partiosh decide to help Pakhi in doing study so that she can get scholarship.

Anuj says to Anupama that Malvika needs her. Anupama gets convinced and decide to stay back. Anuj alert Anupama not to talk about leaving him ever. Duo share an awkward moment. Later, Anuj thanks Anupama for handling Malvika. He feels bad that Anupama too was a domestic violence victim. Anupama reveal to Anuj about her conversation with Vanraj. She recall about confronting Vanraj for doing domestic violence. Vanraj claim he never raised hand on her. Anupama says domestic violence is not about beating someone rather it is also about hitting someones heart hard. She adds he has always disrespected her. Anupama says she has moved on in her life but didn’t forgot what he has done with her. Vanraj says to Anupama that he has already apologized to her. Anupama asks if one sorry can fix everything. Vanraj asks Anupama than what she want in return. Anupama asks Vanraj to change himself. Back to reality; Anuj feels proud of Anupama. Leela informs Anupama about Samar and Nandini. [Episode Ends]

Precap: Samar says to Anupama that it is good he separate with Nandini before marriage rather complicating things post that. Here, Nandini confront Vanraj about his behaviour towards Kavya. Vanraj gets angry on Nandini.