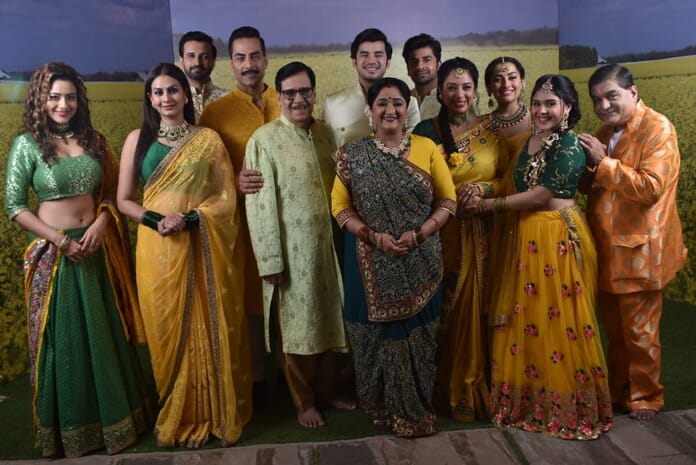 The episode starts with Baa and Bapuji coming for photoshoot. They both are upset that Dolly, Sanjay and Bailu are not present. They gets extremely happy seeing all the three on door. Baa apologizes to Dolly and Sanjay. Dolly says it’s fine as even she made lots of mistakes in childhood and she forgave it. Pailu teases Baa and Bapuji and they all leave to photoshoot.. Baa takes Anupama aside and asks isn’t it all her work and thanks her. Kavya is irked with their drama who were actually fighting and insulting just two days back.

Nandhini says that it’s what is family. Vanraj apologies Dolly but Dolly says she’s very well aware of her brother’s love and anger and asks him to forget it. Vanraj apologizes Sanjay too and says that he has already paid for his deeds. Dolly says that she knew it and asks him to let it go as they are together and that’s what matters. Vanraj says in mind that it’s not enough. Baa and Bapuji clicks pictures and everyone assemble for family photo except Anupama and Kavya. Vanraj calls Anupama to join ignoring Kavya. Bapuji calls her and they all clicks picture. Kavya fumes.

Everyone sit down for mehendi celebration. It’s decided that Anupama and Dolly will adore mehendi for Baa and Bapuji says even he wants to have Baa’s name written on his hand. Vanraj and Sanjay offers to adore mehendi in Bapuji’s hand. They both discuss get they don’t know to adore mehendi. Function starts when Anuj and Kaka comes there shocking everyone. Baa comes to them and thanks them for coming upon her invitation. She says that she insulted them a lot in front of everyone and now wishes to apologize to in front of everyone.

She says that times have changed and people need to start accepting the world of their daughter and daughter in law’s outside world. She apologizes them with folded hands and Anuj asks them to not look at the past but at the upcoming. Kavya is irked but is sure Vanraj will create some drama. Vanraj comes there and patches up with Anuj too shocking everyone including Kavya. She recalls pest and calls the family as chameleons. Anupama is very happy.

Kavya says Vanraj that whether he would be get Anupama and Anuj married in the same mandap. Vanraj asks her to confirm with them so that they can do kanyadaan and leaves. Anupama says Anuj that it’s the first time that her friendship got accepted in the family and she feels extremely happy. She says even Devika was not accepted and wishes for her to be there too. Flower petals fall on them and they both secretly admire each other. She notices Bapuji and GK watching them and recalls his words. They leave. Bapuji and Gk discuss about them teasing each other.

Precap : Everyone dance in the party. They have a discussion about marriage where Pakhi says she lost trust on marriage itself. She says be it arranged or love marriage there’s only fights happening.