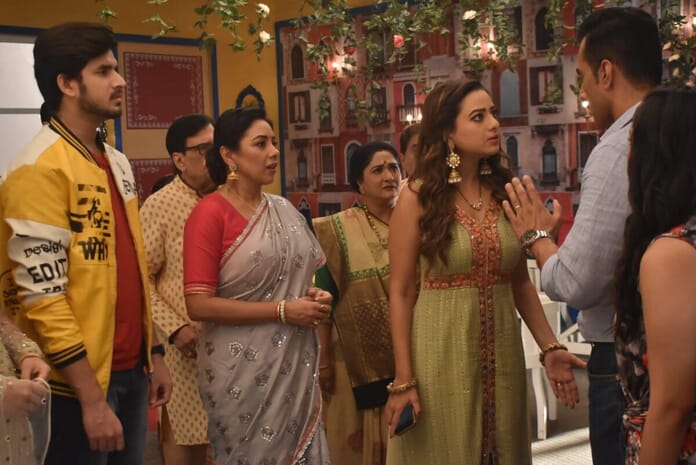 Today’s episode starts with a customer. He gets an admission done of his daughter in Anupama’s dance academy. Vanraj says it is good Anupama’s academy gets a start. Samar and Nandini does the admission of the lots more customer out there. Anupama asks customer to wait in the café if they want. Customer says they are comfortable at the academy. Kavya tries to instigate Vanraj and says Anupama is getting customers and if she wanted she could have send few there. Vanraj replies to Kavya that Anupama didn’t took the responsibility to run his café. Kavya gets irked. There, Paritosh tries to talk with Kinjal but gets interrupted by a call.

Ahead, Kavya says it is time to close the café as no one is going to come. Anupama asks Kavya to stop talking negative. Anupama than asks Shah’s to spread all over the table so that customer thinks café is crowded. Vanraj gets impressed with Anupama’s strategy. Kavya says insipte of that no one will come. She adds if anyone will come than she will change her name. A couple enters the café. Vanraj and others gets happy. Kinjal asks Kavya if they change her name to ‘champakali’. Kavya gets furious. Couple like the place and demand for menu. Girl asks to bring keto burger. Boy out there says menu doesn’t have burger option. Vanraj says they will get it made right away. Chef at the café tells to Vanraj and Samar that he doesn’t know how to prepare keto burger.

Couple about to leave. Anupama stops them and saves the day by preparing the burger. Vanraj and Kavya asks Anupama if she ever made keto burger. Anupama says once on Pakhi’s birthday. Customer likes the burger and praises Anupama. Vanraj tells to Anupama that his first income came because of her. Shah’s too praises Anupama.

Later, Kavya asks to shut the café as it is late. Hasmuk makes Kavya understand not to ever say shut the shop but to forward the shop. Next, Shah’s decide to dine at ‘Leela’s café’. Vanraj extends his hand to do friendship with Anupama. Anupama does friendship with Vanraj. Both laughs together.

Precap: Vanraj waits for customers and think if Kavya’s prediction will come true.