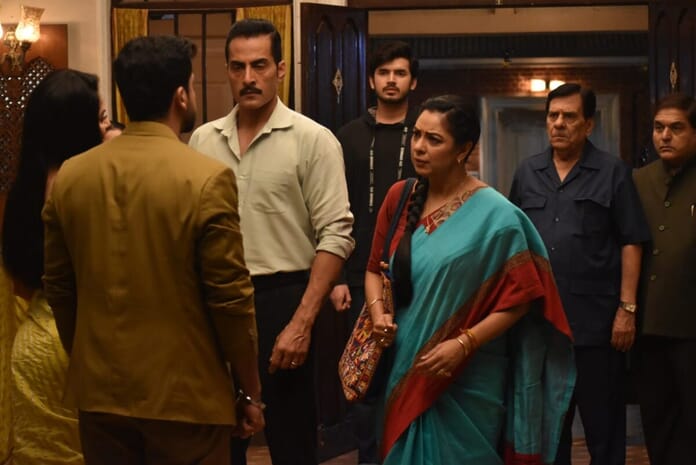 Kavya interrupts and claims Anupama is clever thus, she is helping Vanraj. Rakhi says being a housewife, Anupama only can give such ideas. She adds Anupama keep clings to Vanraj every time. Rakhi says a boy and girl can be a friend but ex-husband and a wife can’t be a friend. Anupama faces accusation. Rakhi adds Kavya is right Anupama is clever. Leela and Hasmuk side Anupama. Rakhi asks Hasmuk not to interrupt else she will disrespect him. Anupama asks Rakhi to show her by disrespecting Hasmuk. Leela interrupts and side Anupama.

Rakhi and Kavya keeps blaming Anupama for trying to befriend Vanraj with a motive to snatch him. Anupama asks Rakhi to go to some other place and do drama. Rakhi gets furious and says to Anupama she hasn’t seen how low she can go. Anupama asks Rakhi to show today, how low she can go. Rakhi calls Anupama characterless and clever. Anupama says Rakhi and Kavya has a problem because she is happy even after a divorce. She further gives a befitting reply to Kavya and Rakhi. Anupama asks Kavya if she has a problem with sharing a house with her. Kavya replies yes. Anupama asks to Kavya next, if she has a problem with Vanraj sharing café with her? Kavya replies yes.

Anupama asks Kavya if she has so much problem than she should pack her bags now and leave house and café both. Kavya says to Anupama that she can’t throw Vanraj out from the café, as Vanraj too has an equal share. Anupama adds the place has work permit on her name only thus, she can throw Vanraj out from the café. She adds since she will not leave the house because of her children and Hasmuk Leela, thus Kavya along with Vanraj should go. Anupama asks Rakhi to give shelter to Kavya and Vanraj. Rakhi refuses. Kavya pleads Anupama not to throw her out from the house as Vanrja and she both are jobless. Anupama asks Kavya how it felt when she turned negative. She asks Kavya and Rakhi not to keep taunting else once she will lose her goodness than it will be a problem for both of them. Kavya stand shocked. [Episode Ends]

Precap: Anupama refuses to go to the café. Kavya asks Vanraj not to worry as she will be with him.