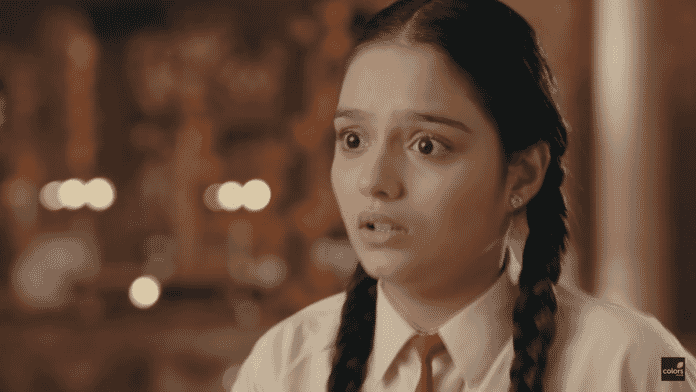 Colors tv show Balika Vadhu is currently going through an emotional ride where Kanku being forced by her family to marry has decided to run away from home with her boyfriend, Madhav. Anand decides to help her even though Anandi suggests not to run away like this. While Jigar is using this opportunity to humiliate Anand and create rift between Anandi and Anand. Amongst all the chaos, will Kanku be able to save herself from getting into this forced marriage?

In the previous episode Kanku planned to run away from school but Jigar intentionally failed the plan by informing Devali that Kanku was going to school with him. Devali and Maadi Baa didnt allow Kanku to go to school. Kanku felt stressed but Anand assured her that he has an alternative plan.

Later the groom’s family informed they wouldn’t come but rather meet at temple next day. Anandi advised Kanku to request Maadi Baa to stop marriage but Maadi Baa got more angry at Kanku. As a result Kanku got upset from Anandi and shouted on her saying not to help her. In the upcoming episodes we will see Kanku running awat at midnight but mistakenly drops a vase. The noise will alert Sejal and Anandi and they will go to check what happened while Kanku will be stealthily hiding there.

To know what’s happening next stay tuned to Balika Vadhu on colors tv and voot.