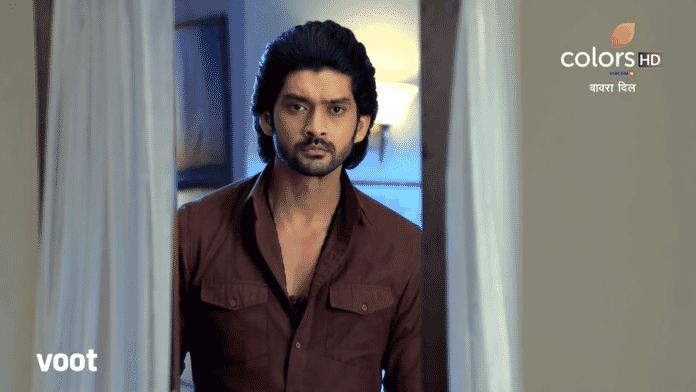 The episode starts with Shiva trying to raise his hand on Kiran angrily. He asks how dare he touched his sister. Kiran stops him. Vilas tells Mangal to start her drama. He says their main focus will be on Sarkar and Sonal’s marriage. Mangal starts her acting and starts behaving strange in front of everyone as if she got possessed. Kiran tries to explain Shiva what actually happened but they hear Mangal’s scream. Priest says holy spirit has entered Mangal’s body now the latter will tell about Goddess’s wish to everyone.

Siddhi comes and tries to handle Mangal but the latter shouts at Siddhi and tells her to back off. Siddhi’s aunt comes in the meantime who is really possessed. She shouts at Mangal for scolding Siddhi and slaps Vilas. Vilas falls down. Mangal and Vilas get stunned seeing all of that. Siddhi’s aunt slaps Sarkar who is going towards Sonal. She scolds him for misbehaving with a woman. Mangal starts accusing Siddhi’s parents and says they called Shiva’s family only to insult them.

Siddhi’s aunt attacks Mangal again. Shiva questions Mangal she looks absolutely fine that means she was acting like Devi Ma has entered her body. Shiva tells Mangal to apologise to everyone for playing with their emotions who has faith on Devi Ma. Mangal leaves with Vilas. Ishvar apologises to Shiva for not treating them in good way. Shiva says I should say sorry instead for the things my mother did. Siddhi gets surprised to see Shiva is apologising. Siddhi notices Sonal’s expressions and thinks something is wrong.

Siddhi asks Sonal what happened? Sonal tells her everything about Sarkar’s evil act and Siddhi feels disgusted. She feels guilty that she couldnt help Sonal. Sonal says Kiran saved her else she would have attempted suicide. Siddhi hugs her and consoles her.

Shiva tells Vijaya that how can Mangal act like that. She played with everyone’s feelings. It’s not acceptable. Vijaya tells him to calm down as Ishvar and Malini will not stretch the matter. Shiva says its not about they will drag the matter or not. But Mangal shouldn’t have insulted Siddhi’s family and shouldn’t have created a scene like that. Vijaya teases Shiva saying he is taking his wife’s side. He is concerned about her. Shiva recalls how Kiran was touching Sonal. He says he can’t take risk with Sonal as Kiran’s intentions are not good.

Sonal rests her head on Siddhi’s lap and says she did a huge mistake by not telling the truth to Yashwant. Siddhi says Sonal is not alone, she has got Siddhi’s back. Siddhi assures her that things like this won’t repeat with Sonal again. Shiva notices them together and gets happy seeing Siddhi’s care for Sonal.

Siddhi asks Vijaya about Shiva next day. Vijaya says Shiva has left. Siddhi says she will question Akkabai and will clear everything today. Doorbell rings. Sonal thinks Kiran has come. She says she will apologise to Kiran for the yesterday’s misunderstanding. Sonal opens the door and gets scared seeing Sarkar. She moves backward. Akkabai enters along with Sarkar.

Jalwa tells Shiva not to lose his calm. Shiva drives his jeep at full speed. He says he wont tolerate anyone looking at Sonal with wrong intentions. He will destroy all those evil eyes. He doesn’t care what Siddhi or the world think about him.

Akkabai comes to the point without wasting time. Mangal greets her and gets happy. Siddhi wonders where is Shiva. Akkabai says her son Sarkar likes Sonal so he wants to marry her. Sonal and Siddhi get shocked to hear that.