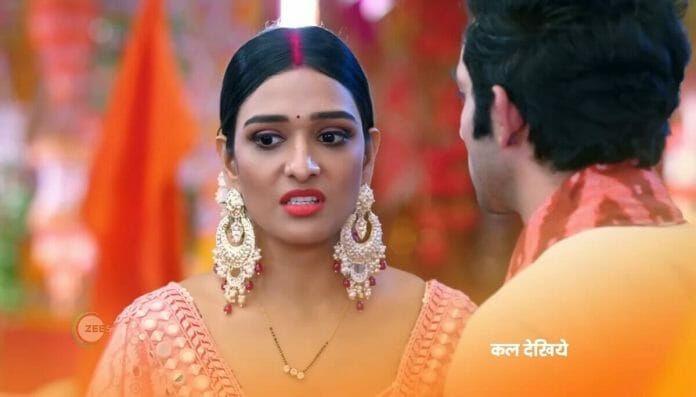 The episode starts with Ayush talking with Shalu on the phone saying Rishi and Lakshmi love each other. Malishka hearing this gets even more jealous. Shalu says to Ayush she already knows this and asks why is he saying all this? Malishka runs into Ayush and apologises to Ayush saying to look at where he is. Malishka leaves from there. Ayush laughs seeing Malishka jealous. Ayush says to Shalu that he is making Malishka jealous. Shalu says he made a mistake and says whenever Malishka is angry she will show her anger on Lakshmi. Ayush hearing this asks Shalu to come here and says he doesn’t want Lakshmi to pay for his mistake.

Malishka sees Lakshmi thinking of something and smiling to herself. Malishka gets angry seeing this and says to Lakshmi that her dream will never come true and says Rishi will never be hers. Lakshmi tries to leave from there. Malishka stops Lakshmi and asks if she will not counter her this time. Lakshmi says to Malishka that there is nothing to say as she is dreaming. Malishka hearing this asks Lakshmi how dare she? Lakshmi warns Malishka. Malishka tries to break Rishi and Lakshmi’s photo but Lakshmi stops it. Lakshmi says to Malishka that she will not be able to separate even their photo. Malishka leaves from there.

Kiran advices to Malishka that she has to break Lakshmi’s fast today. Malishka asks Kiran how can she do that. Shalu recalls what Ayush said and decides to remind Lakshmi to be careful. Shalu calls Lakshmi and asks how is she? Lakshmi says she is fine. Shalu asks Lakshmi to be careful and says to make sure that she doesn’t break the fast accidentally. Lakshmi asks Shalu if she is saying this because of Malishka. Shalu says there is nothing like that and says she is going to come along with Rano. Shalu asks Lakshmi to be careful. Lakshmi talks about their mom with Shalu. Lakshmi says what her mother used to say when she used to do the Karwa Chauth Vrath. Rishi overhears Lakshmi talking with Shalu about their parents. Lakshmi cuts the call.

Rishi asks Lakshmi if she will only share with Shalu about her parents and says she can also share it with him. Rishi asks Lakshmi to tell him about her Dad. Lakshmi starts talking about her Dad. Lakshmi says he is very helpful to them. She also says he loves the three of them more than anything else. While talking about her Dad. Lakshmi feels emotional and has tears in her eyes. Sonia sees Rishi comforting Lakshmi. Malishka looks in the mirror and thanks her mom for giving this bottle. Malishka says Lakshmi’s time is over. Sonia comes and asks Malishka to come with her. Malishka asks Sonia where is he taking her. Sonia says she is taking her out of this house. Rishi comforts Lakshmi and says she is lucky as she got Virendra as her dad. Lakshmi agrees and says Virendra gave her a priceless gift. Lakshmi says Rishi is the priceless gift that Virendra gave. Lakshmi says if her father is alive then he would have seen how happy she is in this house.

Rishi says to Lakshmi that if he met her dad then he would have given him a salute and praised him on how he raised his girls. Rishi teases Lakshmi to make her smile. Lakshmi smiles seeing Rishi’s behaviour. Rishi asks Lakshmi to take a rest.