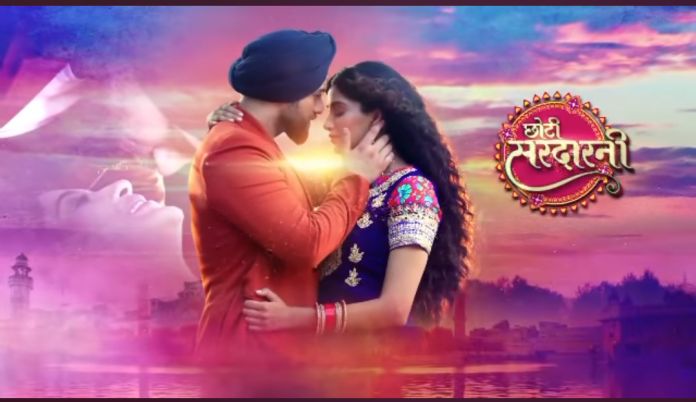 Episode begins with Kulwant tells Ranna that she don’t believe Dolly at all so she wants the tight security. Ranna asks her to not worry about anything. Zorawar sneak into Kulwant’s house. Bittu is about to catch him but Karan takes Bittu from there. Mannat drags Zorawar aside. They shares an eye lock. He gives a rose to her. They hears Kulwant’s voice and comes to sense.

Mannat asks Zorawar that what is he doing there and also about his leg injury. He tells her that he came to answer her riddle and gives wrong answer. She asks him to leave from there. He drops his handkerchief while leaving from there. Kulwant tells Mannat that they are going to book a big hotel of Amritsar and Nirvair coming too. She asks her to get ready. Zorawar finds Mannat’s bracelet and wears it. Mannat keeps Zorawar’s handkerchief with her.

Later, Kulwant’s family and Dolly’s family reaches the same hotel. Kulwant and Dolly meets the Manager. They fights to book the whole hotel. Dolly tells Kulwant that not everything will go according to the latter. Manager tells them that the hotel is so big and both functions can happen. Dolly and Kulwant tells their expectations to Manager.

Dolly tells Kulwant that the latter can show off how much she wants but the latter’s real face will be out soon. Kulwant says that she will also see that how Zorawar’s engagement happens in this hotel. Mannat sees that and runs from there and cries recalling the moments she shared with Zorawar in the forest. Zorawar follows her and finds her crying. They stares each other.

Next day, Mannat gets ready. Jeeto brings Mannat downstairs. On the other hand, Dolly compliments Zorawar. Kulwant compliments Mannat. She asks her to smile and wipes her tears. She tells her that today the latter’s engagement going to happen. Mannat tells her that she can’t marry. She is about to leave from there but Kulwant stops her. Kulwant tells her that their family respect matters for her and she knows that what is right for the latter. Bittu recalls that how Kulwant behaved like this during Meher’s marriage. Kulwant says that her children matters for her the most and for them and she can die and also can kill too. She tells Mannat that Nirvair is the best guy for her.

She adds that Mannat will marry Nirvair for her family and for Harnoor. She says that Harnoor would have wanted Mannat to become a part of this family. And she believes that Mannat will fulfill her responsibility by marrying Nirvair. She tells her that she found a best alliance for her and she is sure that Harnoor must be happy with this alliance.

She says that she fulfilled her responsibility as grandma and now it’s Mannat’s turn to fulfill her responsibility. She asks others to prepare everything for engagement. Karan tries to talk to Mannat. But she stops him from talking to Mannat. Everyone leaves from there except Mannat. Mannat thinks that seems like her fate won’t change. She asks God to keep Zorawar happy.