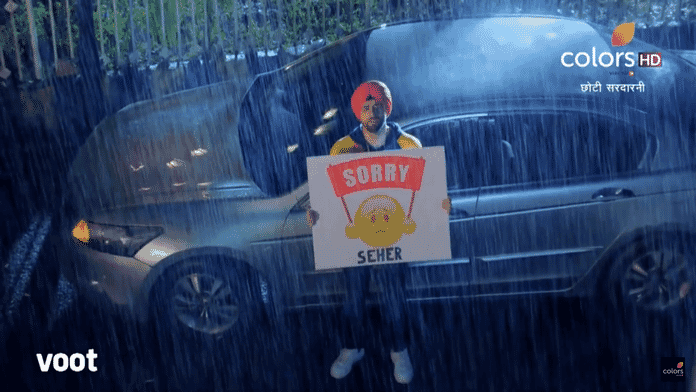 Colors TV popular show Choti Sardarni is gearing up for some high voltage drama . The show now focuses on Sarab, Meher and their children. Earlier it’s seen that Rajveer got arrested for public violation while Seher would be angry at Karan and Param. Now it will be seen that Rajveer gets heartbroken on. Seeing Kunal propose to Seher.

Previously we have seen that, Police arrested Rajveer for public nuisance and Seher was asked to pay for the bail. Seher decided to use the money she has saved for dance studio rent and let go off her dance studio. However before she could pay Rajveer was already out of jail thanks to his sister. His sister punished higher officials for arresting her brother. Seher met with Rajveer and dressed his wounds. She got call from Karan and Param who would be pretending to be very close. However Seher caught their lie and was very angry and disappointed at them.

In the future episodes we will witness, Seher and Rajveer will go to skydiving unaware that Rajveer has acrophobia. Seher will scold Rajveer for not saying it before hand when Rajveer will say that he will die for her friendship. Seher will get overwhelmed. On the other hand, Rajveer will plan to propose Seher in a grand way while his sister will be on her way to meet Seher’s family. However as a twist it will be seen that Kunal will confess his love to Seher and Seher will happily accept it. Rajveer will be heartbroken upon seeing it and his sister will return without meeting Seher’s family. Later, Seher will scold Karan and Param for making Tricky cry.

Who will Seher end up with? Rajveer or Kunal? Will Param and Karan gets united?