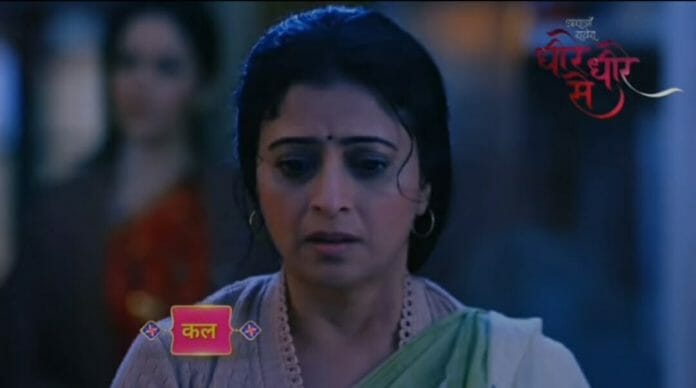 Star Bharat’s show Dheere Dheere Se is gearing up with an interesting drama with Bhanu taunting Bhawana after getting the insurance cheque from her also asking her to stay with Aanchal in kitchen. Meanwhile Raghav wonders which client Brij Mohan and Gaurav is meeting office hours. Now it will be interesting to see what will happen next.

In the current track it shown that Bhawana happily goes towards her house with the cheque in her hand. Meanwhile Swati inquires Savita to tell her the reason behind both the family’s fight. Savita tells her once upon a time both Brij Mohan and Jagjivan were friends but in the land case the verdict come in favor of Jagjivan so in order to take revenge from the Shastri’s, now Brij Mohan agreed to help Vikas and Poonam.

Brij Mohan arrives there and asks a cup of tea. Swati thinks to create more misunderstanding between both the family’s using Bhawana. Bhawana expresses her joy to the family members for getting the insurance cheque but Bhanu taunts her also blames her for the humiliation he faced after taking the cheque from her shocking the former.

Jagjivan scolds Bhanu for blaming Bhawana for his mistakes and leaves. Bhanu tells Bhawana that she and Aanchal has to stay in the kitchen as she refuses to sell the upstairs room shocking the latter. He asks her to decide what she wants then leaves.

Raghav meets Gaurav in the office and have a heart to heart conversation with him about the struggles people are facing recalling Bhawana’s words. He also wonders which client Brij Mohan is meeting at this late.

Other side Aanchal expresses her agony to Bhawana to lose the room in which all three of them created more memories for her decision to not to sell the upstairs room. Bhawana says to Aanchal that room is important to her father and at any cost they won’t lose this case.

In the upcoming episode it will be shown that Bhawana will say to Bhanu that she want thirty thousand rupees to pay for Aanchal’s school trip also Lawyer’s fee. Bhanu will give her a part amount and ask her to choose wisely then leaves. Bhawana will get shocked.