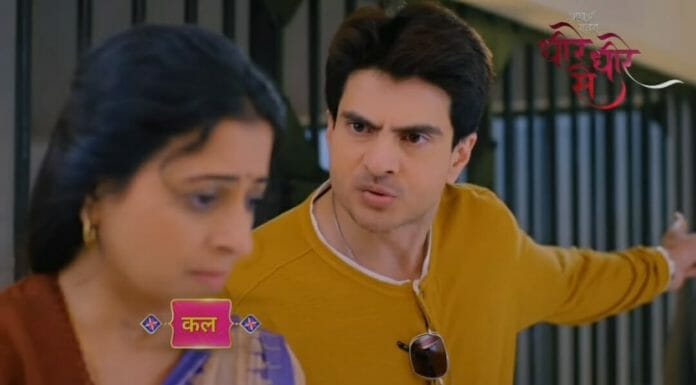 Star Bharat’s show Dheere Dheere Se is gearing up with an interesting drama with Bhawana and Raghav decides not to meet one another again meanwhile Bhanu agrees to give his room to Abhishek and Meera after marriage also his other decision that will trouble Bhawana upsets Abhishek and Jagjivan.

Now it will be interesting to see what will happen next? Will Raghav and Bhawana stay away from one another? What is Bhanu’s plan against Bhawana? Will Bhawana’s decision to give the insurance money to Bhanu upset Aanchal?

In the current track it shown that Raghav taunts Bhawana and gets in his car to leave but Bhawana stands infront of his car. She apologises to him for regretting her actions also thanks him for helping her to get her money back saying without him it’s not possible.

She further shares her worries about their family members finding about his help for her so suggests to stay away from one another which upsets and angers Raghav but the latter agrees to Bhawana’s decision.

Raghav also tells her that he was there when she was in a helpless situation so he did things to get her what she wants but now she is taking decision for both of them and expresses his disappointment. Other side Meera’s mother asks the Shastri’s this isn’t fair to let their newly wed daughter in law stay outside so what they are going to do.

Bhanu asks Meera to tell him whatever the room she likes which he will give it to her. Meera asks Bhanu and Malini’s room shocking everyone but Bhanu agrees to fulfill Meera’s demand. Other side Bhawana tells Raghav about her life which has changed tremendously after the demise of her husband then expresses her gratitude.

She then leaves while Swati inquires Savita about the disputes real reason between both Shastri’s and Srivastav’s. Savita refuses to give more information. Raghav decides to smoke but Bhawana comes there and reminds him about his promise to Brij Mohan then leaves.

Raghav throws the cigarette and smiles while Bhawana smiles looking at the cheque in her hand on her way to home.

In the upcoming episode it will be shown that Bhawana will happily inform Bhanu and family she get the insurance money cheque and gives it to Bhanu. Bhanu will say to Bhawana after Abhishek and Meera’s marriage they both will stay in his and Malini’s room so he and Malini will take her and Aanchal’s room.

He will further ask Bhawana and Aanchal to stay outside. Aanchal will look annoyed and Bhawana will get shocked.