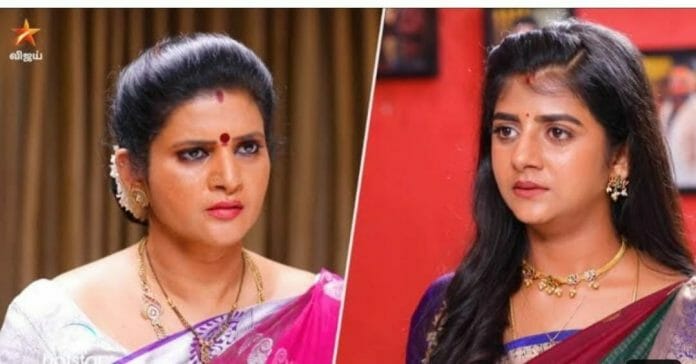 In the previous episode we saw; Parthiban supported Kavya in front of Parvathy and left from there. Kavya advised Parvathy to consult a doctor for her high BP. Later, Parvathy, Kavya and Parthiban attend Karthi’s wedding. Karthi family welcome them.

Parvathy insulted Kavya for looking around often to confirm no one watching her. Kavya stayed silent there. Bride informed Karthi that she loved someone before marriage. He stopped. the wedding.

Parvathy badmouth about the bride but she indirectly pointed Kavya there. Kavya asked Parthiban Does he thinking loving a person before marriage was wrong? He denied it. Kavya advised him to talk with his friend about it. Parthiban nod with her

In the upcoming episode viewers will see; Parthiban advise Kaarthi to marry her reasoning she revealed the truth to him before marriage. Karthick will marry her. Everyone will praise Parthiban but he give the credit to Kavya.

Parvathy will blame Kavya that Parthiban won’t accept her for hide the truth. Kavya will reveal her Parvathy forced her to marry him. She didn’t marry him in her own wish. She committed all mistake but accusing her. Later, Jeeva will return Priya’s ornaments to her