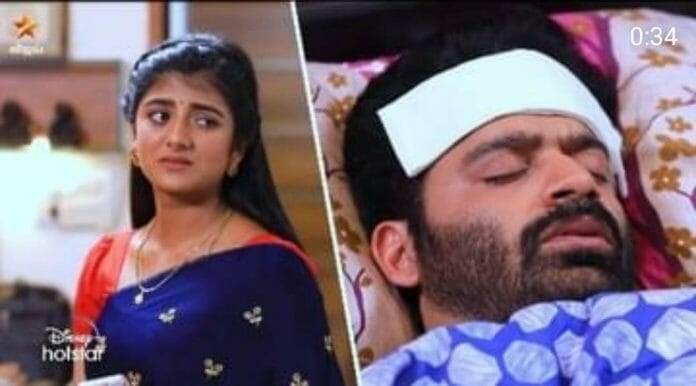 In the previous episode we saw; Sakthi demanded Kavya to open her room. Kavya asked Parthiban to hide somewhere and open the door. Sakthi inquired her who entered to her room? Kavya lied to her no one came to her room. Sakthi said to her she heard some sound.

Kavya managed to lie with her. After Sakthi left Parthiban teased Kavya for talked with his photo in his absence. Kavya pretended to be angry on him. Parthiban asked her to cook something for him reasoning he didn’t eat anything.

Kavya leave to cook for him. Meanwhile, Parvathy noticed Jeeva awake. She advised him to sleep on time. She noticed Parthiban missing in his room. She doubted Parthiban went to meet Kavya.

In the upcoming episode viewers will see; Kavya will lie to Parvathy that she has no idea about Parthiban whereabouts. Kavya will feed food to Parthiban. Later, Kavya will learn that Parthiban falls sick. Kavya will take care of Parthiban. Parvathy will demand Kavya to leave from there before he get conscious.