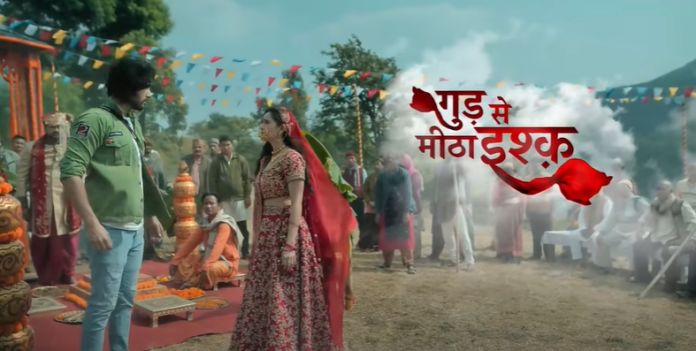 Today’s episode starts with Kajal questioning Neel for blaming her for all the problems in his life. She says that he can’t escape by putting blames he has to point her mistakes too. Neel says that Kajal has made lots of mistakes.

He says that her faults are that she applies sindoor, she asks him to marry Pavitra even after applying the sindoor, tries to act Mahan, also they lost to Madhur because of her. Neel and Kajal call each other mad. They start shouting at each other. Dev breaks a glass to stop their arguments. He asks them to shut up and listen to him only.

Khurana family worries about arranging 50 Lack rupees for Madhur. Jaidev says that he can hardly arrange 5 to 10 Lac not more. Pari says that if they can’t arrange now Madhur will leave for Singapore which will postpone the marriage and she wants to get married immediately. Nutan asks her not to worry as they will arrange something and give their marriage.

Dev scolds Neel and Kajal. He says that Kajal can do anything for Neel but can’t accept her love for him on the other hand Neel does all possible things for Kajal but can’t accept his love for her. He asks Kajal if she really wants Neel to get married to Pavitra, can she stand any girl with him.

He asks Neel if he really wants to marry Pavitra, if he really loves Pavitra, if he can tolorate it if Kajal removes her sindoor etc. He asks Neel to confess his love for Kajal. Pari asks her father to give the money to Madhur. Her father agrees to give it. He asks Madhur sometimes to arrange it. Pari asks him to arrange it immediately. She says that she can do anything if they don’t give Madhur money immediately.

Dev says that Neel and Kajal can’t win against Madhur as their hearts and minds are not in sync. He asks them to talk, sort their issues and come to a solution and stick to it. Pari puts fire in the curtain in anger. Neel says that he won’t marry Pavitra until Kajal removes her sindoor. Kajal says that Neel and Pavitra should get married as they love each other.

Neel sticks to his demand. Kajal asks Neel if she removes her sindoor will he marry Pavitra. Neel says yes. Kajal goes to remove her sindoor. Neel gets a call and is asked to come home immediately. Khuranas try to pacify Pari but she doesn’t listen to anyone. Her dupatta catches fire. Neel pours a bucket of water on her dupatta. He tries to make her calm. She asks Neel to tell his father to give Madhur 50 Lack rupees.

She becomes uncontrollable and falls on the glass table. Pari is taken to the hospital. Khuranas worry for her. Madhur tries to show fake concern for her. He says that he already lost his sister, can’t afford loose Pari now. Nutan believes that Pari will be fine. Jaidev tells Madhur that he is arranging the money. Neel says that none will talk about money until Pari recovers.

Precap: Kajal prays for Pari. She gets Puja’s flower and notices something. She goes to Pari’s cabin and confronts Khuranas. She says that she was trying to expose Madhur since long but none trusted her. She adds that now she has got such proof which none can deny.

Episode begins with Pari getting ready for her mehendi function in her house and all the other ladies are helping her for this. On the other hand, Neil got ready too and all the boys are with him in his room. Kajal comes into the hall and notices everyone is enjoying and chatting with each other.

She comes and tries to greet the guests of the party and also feels bad to see Pavitra standing as the fiance of Neil in front of all the people. Pavitra was very happy and she was enjoying herself. Neil also comes into the hall and joins his family for the celebrations meanwhile Pavitra insists him to join her for a dance performance and they start dancing in the centre of the entire space and everyone is watching them and appreciating them.

However while dancing, Neil imagines that it is not Pavitra but Kajal who is dancing with him and he was completely lost in her but then he comes back to his census and realises that he is waiting married to Pavitra and not Kajal and she is his fiance at this point. This is also present at the hall when after sometime Mathur comes with his family to attend the marriage ceremony function. The entire family welcomes Mathur and his family and Pari also comes down in the mehendi look and everyone is looking at her as she was looking beautiful in the green coloured suit.