Episode starts with Agastya leaving everyone speechless when he says he will marry Nia. Choti is hurt. She asks Agastya even after knowing the truth why do you want to marry Nia? Agastya replies that you didn’t trust me, you didn’t give me one chance to prove myself then why will I listen to you now? Now you are taking another decision as per your convenience.

Some day Nia will again do something and you will again take some stupid decision. I am not your puppet. I don’t want to stay in this weak relationship. You have not the ability to handle our relationship. I want freedom. Choti asks then what do you want? Agastya says I will marry Nia within two days. You will make all the arrangements. Now I will remain stubborn.

Choti gets shocked. She recalls Agastya’s words. Shona comes and consoles her. She says I know you are stressed. Agastya is not supporting you. But don’t worry everything will be alright. Shona says why did you take such decision when you know Pushpa and Nia troubled you a lot. Why did you announce their marriage? Choti says I was a fool and I took the decision emotionally but Agastya is doing this intentionally. Shona says he has gone mad. He only loves you. He won’t marry Nia. She says to Choti that you have to be strong. Don’t cry. You will make everything alright.

Nia and Pushpa look happy. Nia wants to try her lehenga but she sees the cupboard is empty. They get shocked. Pushpa says where did our luggage go? I know who is behind this. She starts calling Choti. Choti pushes one trolley and it hits Nia. She is about to fall but Pushpa saves her. Pushpa says how dare you? Are you mad? Choti says I was mad before but now I am not insane. You took advantage of me. Now its my turn. You have only 15 minutes.

Leave right now. Shona and Mani praise Choti for taking such step. Choti says why are you staring like this? Nia says then what about my marriage? Choti says nothing will happen. I became blind thats why I agreed but now I understood that you two can never change. My mom was right. Shona says don’t talk too much. Get them out from here. Choti hold Nia’s hand. Agastya stops Choti and says what nonsense is this? choti says I am doing right. If they go then only everything will be fine. Agastya takes Choti with him.

Agastya packs his bag and says then get me out of here as well. I want to go with my mom. Choti says you are my husband you will not go anywhere. Agastya says you only brought my mother back. Choti says Pushpa and Nia are planning against us. They are trying to separate you from me. They have to leave. Why don’t you understand? I admit my fault that I trusted them. But I won’t repeat it again.

Pushpa says to Nia that take your bag and go inside. Nia tries to go but Arushi Shona stop her from going inside. Pushpa says you all have crossed your limits. She says to Arushi that let me go. How dare you do this to your mother? Arushi says mom please, this is Arav and Guddan’s house. They will decide only who will stay here. Pushpa slaps Arushi.

Mani shouts at Pushpa. Pushpa calls Mani as useless. Arushi says talk with respect. He is my fiance. Pushpa says I don’t accept this relationship. She tries to take engagement ring forcefully and Arav stops her. Arav gets angry and says to Pushpa that don’t do this further else I will forget you are Arushi’s mom. Pushpa says you are such a useless man. She taunts him saying you don’t earn money. I wont even hire you for polishing my shoes and you are threatening me?

You want to marry my daughter so that you can use our money for your enjoyment. Arushi says still he is not a liar like you. He is not a cheater. He is honest and loves me. Agastya stops Arushi and says you can’t talk like this to mom. Don’t take Arav’s side. Arav and Agastya again get into an argument. They are about to hit each other but Mani stops them. Nia provokes them. Choti says just stop it. Agastya says its happening because of you. If you can then make everything alright. Do it. 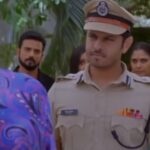 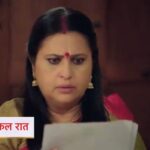 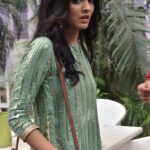 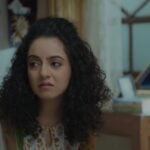