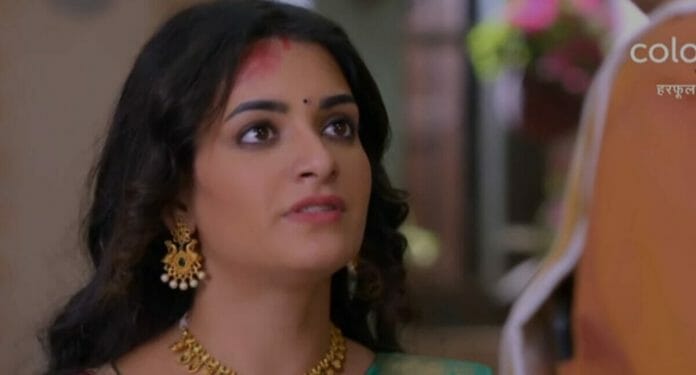 Shagun Sharma and Zebby Singh starrer Colors show Harphoul Mohini never failed to engage audience with its gripping storyline. This is the story of Malayali girl Mohini and Haryanvi boy Harphoul. Now, Mohini refused to leave Nakroli so it will be interesting to watch that what going to happen in the future episode.

Earlier it’s seen that, Mohini said that she is coming to take revenge for everyone’s tears and screamed. Harphoul heard her scream and searched her in the house. He found her in unconscious state in the secret room. He took her to his house. Maai got relieved seeing Mohini. Vijayan asked Mohini to leave with him.

But Mohini refused to leave Nakroli saying that she has so much to do. Other side, Balwant noticed the broken jar and fresh watermelon. He ordered Banwari to bring Tantrik. Banwari reminded him that the latter killed Tantrik. Balwant said that he will kill Mohini. Mohini hugged her parents. She said that she is strong enough to take care of herself and went inside.

Harphoul told Vijayan that he started loving Mohini. Mohini’s parents refused to believe him and left from there. Later, Goddess told Mohini who is sleeping that she choosed her to destroy the evil soul.

She said that Mohini will give a birth to a baby girl and that girl will fight for all the women. Balwant said that no one can give birth to baby girl in his village.

In the upcoming episode, Balwant will tell Shalini to kill Mohini if the latter want to save her household. He will give poison to her. Later, Shalini will mix poison in the drink and give it to Mohini.

What will happen to Mohini? Will Shalini realise her crime?