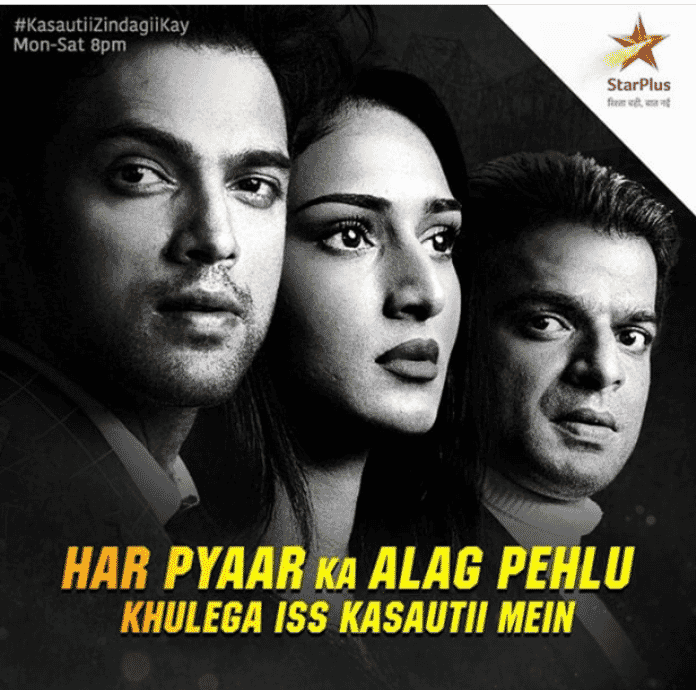 The episode starts with Anupam holding Nivedhita shocking everyone. Nivedhita and Mohini question why he’s here. Anupam says Nivedhita that he came for her. Mohini tries throwing him out and Moloy hugs him. They greet each other and Anupam acts unaltered.

They both mock Mohini and Komolika. Mohini shouts at them that they are divorced but Anupam reminds her that they are not yet divorced. Moloy says Mohini that she’s the only mother who spoiled her own daughter’s life. He then goes to Nivedhita and says that she loves everyone but just doesn’t know the difference between good and bad even after being a headstrong woman.

Anupam and Moloy goes inside to have drink while Mohini and Nivedhita stands irked. Komolika asks them to continue their drama and she’s leaving as its her first day as boss in Bajaj company. She leaves the place. Anurag asks Kaushik if he spoke with Kukki and he nods no.

Anurag asks him to not lose hope. He says that it’s common in love and he shouldn’t leave her side at any cost. Kaushik says that he’s ready to get any punishment from Kukki but just want her back in his life. Anurag says that seeing him he can say sure that he’s going to be a bigger lover boy than him and asks him to go meet Kukki with a handkerchief.

Kaushik leaves and Anurag thinks that Kaushik reminds him of his own self during college time. Just like Kaushik he’s also ready to get any punishment in order to get Prerna back in his life. Kaushik comes to meet Kukki. Shivani forcefully brings Kukki. Kukki stays angry and Kaushik apologizes her for hurting her.

He says that he didn’t knew that it was her phone on the table and thus used it. He agrees that he didn’t like her but later he didn’t knew when but he has fallen for her. He requests her to not hate him and pleads her to try to forgive him. Kukki cries and he offers his handkerchief but she doesn’t take it. Kaushik leaves saying that he’ll wait for her to forgive him but once again pleads her to not hate him.

Nivedhita shouts at Anupam to leave the house as her love for him died long back. Mohini watches them from far. Anupam says that he never forgot her and says he still loves her. He reminds her of her past and says that he tried a lot to forget her but couldn’t. He says that he wants her back in his life. He cups her face and pleads her to come back to him. At first Nivedhita struggles under his hold but soon melts down.

Mohini watches it fuming. She comes down and reminds Nivedhita that he’s the one who insulted her mother. She says that he’s the one who cared for Prerna’s family more than Basu family during Anurag and Komolika marriage. Nivedhita says she remembers everything but Mohini says if she did she could’ve wooed Bajaj by now. She says that she loved and still loves Anupam which is why she couldn’t succeed in getting Bajaj. Mohini says that he came back for money as all his money would’ve lost.

Moloy comes there Anupam is not in need of money as he runs a small company which is performing well. He says he’s in a need of family. He also says that he named the company after Nivedhita and leaves. Nivedhita promises Mohini that she will not check for the name but gets happy inside. Komolika asks Prerna to announce the employees about their new boss.

Bajaj comes there and says in order to become the boss of Bajaj company she needs to pay two thousand crores. He reveals that Prerna has only 10% share of the company while the remaining 90% is with him. She only have 5% of Prerna’s stake and they both are just acting owners who work under him. Komolika confronts Prerna for playing smart and Prerna is unaffected. Komolika gets irked.

Precap : Chandrika reveals the truth to Priyanka. Priyanka pleads Prerna to adopt Samidha. Komolika urges Chandrika to arrange for her adoption of Sneha.