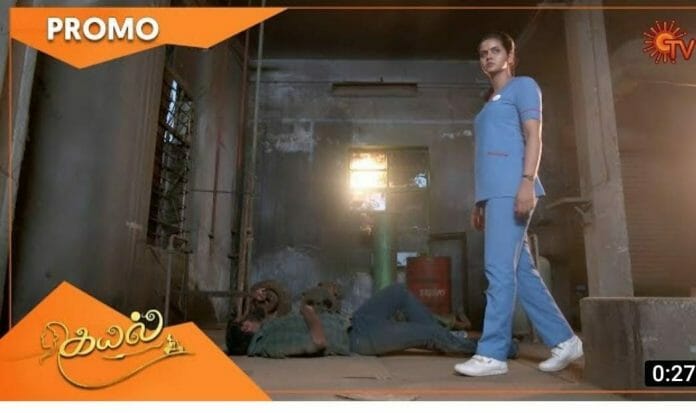 Sun TV’s popular show “Kayal” currently deals with Kayal trying to solve Devi’s issues. Earlier its seen that Kayal failed to collect the money to buy Jewels. Now it will be seen that Gowtham abducted Kayal

In the previous episode we saw; Vadivu lashed out at Moorthy for entered into her house after insulted her husband. She complained to him that Kayal forced Subrahmanyam to drink alcohol. Doesn’t she have shame to buy alcohol?

Dharmalingam said to him that it will bring shame to their home after she got married to someone. What will her in-laws think about her? Moorthy assured to Dharmalingam that he will make sure Kayal won’t create problems in his house again. He convinced Dharmalingam and take him to meet Financier.

Later, Kayal met the Inspector and shared about Anbu to him. He assured Kayal to council him. Later, Varatharajan admitted in hospital for heart attack. He revealed to Gowtham that he was pretending to be sick to escape from the police. He offered 5 crores to him. Kayal refused to accept his offer.

In the upcoming episode viewers will see; Gowtham will make Kayal unconscious and abduct her from there. Kayal will notice the goons around her. She will free herself and beats the goons. Gowtham will tell his assistant that Kayal won’t return to his life again. He will get shock to find Kayal there.