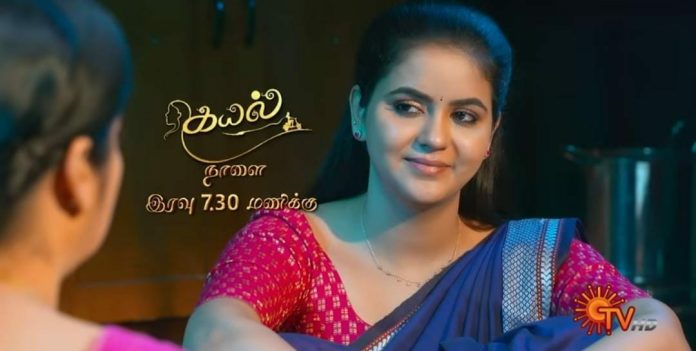 Sun TV’s popular show “Kayal” currently deals with Kayal trying to solve Devi’s issues. Earlier its seen that Kayal failed to collect the money to buy Jewels. Now it will be seen that Kamatchi to feel proud of her upbringing

In the previous episode we saw; Kamatchi said to Kayal that Moorthy created misunderstanding between Vedhavalli and their family. Kayal said to her it’s important to make her understand they were not responsible to this situation but Moorthy’s foolishness. Kayal left from there to meet Vedavalli.

Vedavalli noticed Kayal and lashed out at her. She apologized to her behalf of Moorthy. She was not giving heed to her plea at all and lashes out at her. Kayal plead her to don’t punish Dev and her unborn baby for Moorthy’s mistake.

Vedavalli said to her if she pay 30 sovereign gold as punishment to it then she will accept Devi as her daughter in law. She demanded her to give it. Kayal left from there without option. Later Periappa shared to his family members that he manipulated Vedhavalli against Kayal. Kayal can’t able to pay her back so they will come to him for help.

In the upcoming episode viewers will see; Dhanam will advise to Moorthy if he change himself into responsible person then this family members will lead a happy life. She will ask him to do some work to earn money.

Kayal will say to Kamatchi that she don’t take her siblings words to her heart. She will add that her happiness is Anadhi become a doctor, Anbu as Police. Till they achieve their aim she gonna take care of them. Anbu will hear it.