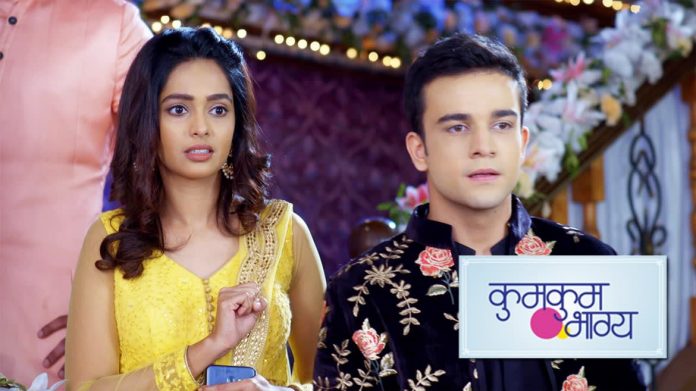 The episode starts with Prachi saying love dragged me to this house whenever I’m going far but Ranbir cheated me and I trust his words even though I saw his reality and it hurts when my eyes get open. Shahana consoles her. Prachi says Rhea is getting all the love and my kid is not getting the love she deserves. Ranbir comes there to talk with Prachi. Shahana asks him to leave Prachi alone. Ranbir refuses. Prachi closes the door at his face. Ranbir sits near the door and thinks he didn’t think this day will become this way. Prachi in tears says everything is destroyed. Shahana consoles Prachi.

Pallavi calls Ranbir and asks him to take blessings. Ranbir takes her blessings. Rhea asks what are these arrangements. Pallavi says it’s a weighing machine and we will donate things of your weight to poor people and she asks Rhea to take a rest. Kamaleswari asks Prachi if she is pregnant. Pallavi says she is not and she is the first wife of my son and she didn’t believe in family. Ranbir says, Mom! Seriously. Pallavi says he doesn’t like to talk about family. She goes to attend to guests. Kamaleswari says she can see the future and asks Prachi to ask her if she wants to know anything as I saw questions in your eyes which noone can answer. Dadi says she is not happy in her life. Pallavi comes there. She sends Prachi to bring Rhea.

Ranbir tries to stop Prachi but she leaves in tears. Prachi goes to Rhea’s room. Rhea asks if she came to congratulate her? Are you shameful to wish infront of everyone? Prachi says she came to call her for Pooja. Rhea says she is feeling excited. Rhea asks Prachi if she is feeling bad that she is pregnant before her with Ranbir. She says your destiny is not good and that time you’re with Sid right. Prachi says enough. Rhea goes washroom because of a vomiting sensation.

Prachi passes the napkin. Rhea says she is loving the care of everyone and Ranbir will take care of her like a good partner and anyone can become a wife and it’s a special feeling to become a mother and you don’t understand it as you are a barren woman. Prachi says I am not barren but pregnant with Ranbir’s baby. Rhea gets shocked and says you’re lying and your baby will be illegal and you’re telling that you’re pregnant to gain attention. Prachi asks Rhea to feel her baby by placing her hand on her stomach.

Pallavi asks Ranbir why he is standing gloomy when guests came to share their happiness and you’re so happy at the party. Ranbir tries to tell her truth but guests interrupt them. Pallavi asks Shahana to call Prachi and Rhea. Dida calls Shahana.

Pallavi goes to check on Rhea and Prachi. Rhea asks Prachi to not talk in this way. Prachi says you have to listen to the truth and don’t talk anything against my baby. Pallavi and others ask baby. Alia says she can’t be pregnant. Prachi says she is pregnant and they forced her to reveal it. Pallavi says even if you show me a report, then also your baby will not be the heir of this family and I will never give this family’s name to your baby and your baby will be illegemite so stay away from Rhea.

Rhea smirks and says these celebrations are for my pregnancy and I know you’re doing this drama to ruin my happiness so leave from here and she asks Pallavi to throw Prachi out as I can’t stay with Prachi under one roof. Alia asks if she decided to become pregnant seeing Rhea. Shahana says Ranbir will tell about it. Pallavi shuts her and tells Prachi that’ they won’t accept her baby.