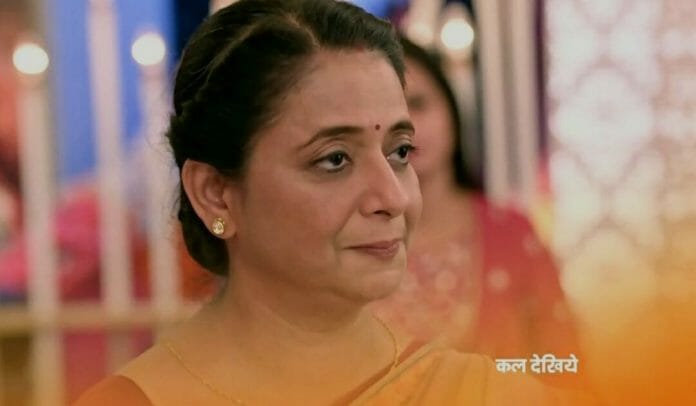 Zee TV Popular show Kumkum Bhagya is attracting viewers with an interesting storyline. currently, Rhea promises to ruin Prachi has glued the audience to the screens.

As reported Rhea vents her frustration to Alia and says that she will not forgive Prachi so I’m going to make positive for us. Alia asks what’s she planning. Rhea says you will know it and she requests Alia to make her men arrested who tortured her.

She leaves. Alia calls the police. Sid asks Shahana to take care of Mihika. Shahana assures him she will take care of Mihika by becoming her shadow. Prachi and Ranbir dance together which infuriates Pallavi. Alia sees the courier boy and takes him to her room. Rhea notices it.

Courier boy requests Alia to leave him. Alia threatens with her fingers and asks him to hide in the cupboard. He takes ropes and notices Alia doesn’t have any gun with her and tries fo escape. Rhea hits him with a plate. They decide to hide him in the kitchen. Pallavi warns Prachi to stay away from Ranbir.

Rhea and Alia drag the courier boy to the kitchen. Ranbir feels suspicious and comes to the side. Rhea diverts Ranbir’s attention. Shahana notices Alia man is taking Mihika. She thinks to inform Prachi about Mihika’a location but she didn’t find her phone.

Alia man comes to her. Shahana escapes from him. On another side, Everyone rocks the dance floor with their performance. Doctor Preethi comes there. Rhea notices her.

In the upcoming episode, viewers are going to witness Pallavi will ask Dr. Preeti if the DNA matched or not. Dr. Preeti says it is matched and Rhea’s baby DNA matches well with Ranbir’s DNA perfectly, which means this baby is of Ranbir. Rhea smiles. Prachi gets shocked.

Why Preeti gave false testimony? Will Shahana be able to escape from Alia’s man?
All these questions will be answered in the upcoming episodes.