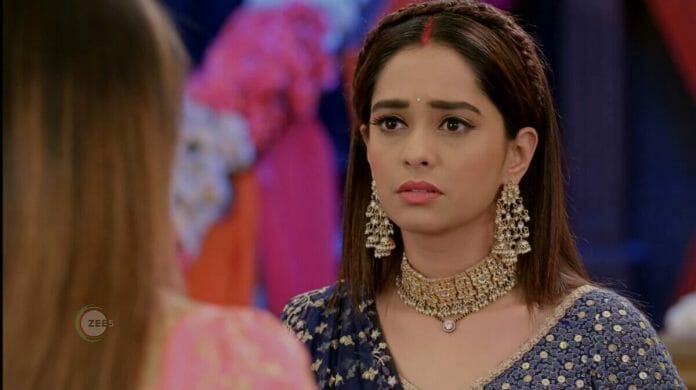 Zee TV Popular show Kumkum Bhagya is attracting viewers with an interesting storyline. currently, Pallavi apologises to Prachi has glued the audience to the screens.
As reported earlier Ranbir hits the main goon with a box. The goon drops the gun then they fight with the goons and leave out locking goons in a room. Police come there to arrest goons but some of them escape. Pallavi and Vikram search for Prachi and others. Dida manages guests by disguising Sid as Prachi.

Pallavi and Vikram see returning home with Ranbir and others. Pallavi scolds Prachi for going out leaving her sangeet. Ranbir says Prachi saved their family reputation and says Prachi single handedly saved Rhea and Mihika today from human traffickers. Pallavi and Alia thank Prachi and apologise to her for misunderstanding her. Alia receives a message that Preethi is sending a report.

Sid asks Prachi how Mihika got kidnapped. Shahana reveals the truth to him. Mihika comes there and says Rhea can save me but she didn’t. Shahana says Rhea was trapped in her plan.

Mihika says Rhea is safe but I’m not safe and I’m still under their surveillance and they will kill me if I tried to outsmart them so think of a way to deal with them. She leaves. Sid feels bad. Prachi asks him to wait for some time as they can expose Rhea with a report then her game will be ended.

In the upcoming episode, viewers are going to witness Rhea will tell Alia that Mihika’s presence in the sangeet is dangerous to them and they can get exposed at any moment. Rhea and Alia drag some men. Ranbir goes to that side in suspicion.

Pallavi will warn Prachi to not force her to take a step that may make her hate her.

Can Prachi be able to expose Rhea? Will Pallavi realise her mistake?
All these questions will be answered in the upcoming episodes.