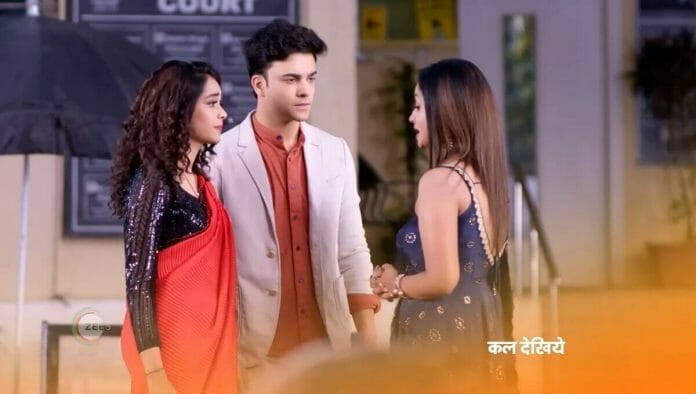 Zee TV Popular show Kumkum Bhagya is attracting viewers with an interesting storyline. currently, Alia’s new conspiracy has glued the audience to the screens.
As reported earlier Pallavi confronts Alia about why she came their home. Alia calls lawyer inside. Manish enters. He tells Rhea has filed the case against the Kohli family. He says it is a clear-cut case of bigamy.

Alia says she will prove that he lied to them that he was divorced. Family members feel tense. Alia says the choice is yours and if you don’t want to lose your respect in court then settle everything. She leaves.

The next day, Prachi and Ranbir decide to meet Rhea to convince her. Alia sends Rhea to office. Ranbir and Prachi come to Alia’s place and asks her about Rhea. She tells them Rhea went to office. In the office, Rhea misses Ranbir and cries for ruining her life.

Prachi and Ranbir reach to office. Prachi calls Rhea and tells her that they came to talk to her about the notice she send to them against Ranbir. Rhea says she didn’t send any notice but Prachi doesn’t hear.

Prachi asks where is she. Rhea tells her she is near Alia’s cabin. Prachi and Ranbir enquire about Alia’s cabin. Alia men mislead them by giving under construction way. Rhea calls Alia and confronts her.

In the upcoming episode, viewers are going to witness Alia will tell Rhea that she didn’t like her interference in her plan. She says if you had not interfere then Ranbir, Prachi and their so called baby. She stops herself.

In court, Rhea admits her mistakes and apologizes to Prachi and tells that she hopes nobody gets a sister like her. Outside the court, Rhea tells Prachi and Ranbir that she wants to see them happy with their little angel. Prachi gets emotional.

will Alia change seeing Rhea’s realization?
All these questions will be answered in the upcoming episodes.