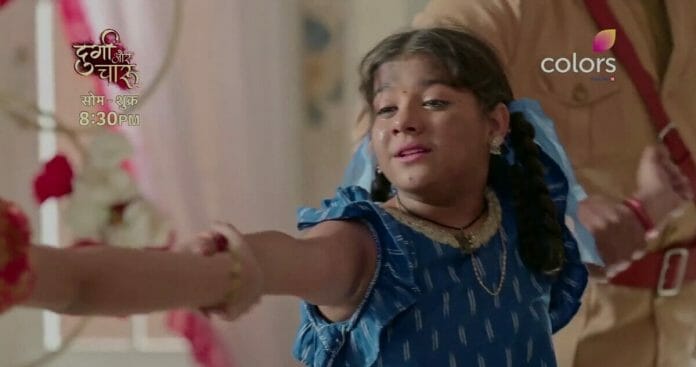 Now, Durga and Charu meets after 5 years and they gets close without knowing that they are sisters. Charu gets accused in murder so it will be interesting to watch that what going to happen in the future episode.

Earlier it’s seen that, Baanke learnt that Durga and Charu are sisters. He told the truth to Bholi. But Bholi lied to Choudhary family that Chumki is Devi by showing Charu’s childhood things.

In the upcoming episode, Baanke will tell Bholi that Charu will get her family and the will end up in jail. Bholi will attack him to achieve her dream of living rich. She will notice that Baanke escaped. Other side, Durga will apologize to Chumki on Binoy’s behest. Chumki will fall down and lie that Durga pushed her.

Durga will defend herself. But Binoy will believe Chumki not Durga. Polash will tell Sumona to be careful around Chumki. Charu will come there and ask Durga for help. Meanwhile, Sheru will return to orphanage with his man. Bholi will kill Sheru’s man. She will ask Sheru to make his man Baanke and tell to police that he witnessed Baanke’s murder.

She will reach the palace and claim that Charu killed Baanke. Sampurna and Durga will defend Charu. Police will come there to arrest Charu. Charu will tell Durga to get educated and become courageous girl. Police will take Charu from there.

Bholi will murmur to Chumki that Baanke is alive still. Chumki will cry saying that she can’t live without Bholi so Bholi has to live in the palace. Sampurna will give permission to Bholi to stay in the palace.

What will happen to Charu? Where is Baanke?

To know what will happen next in your favourite show Durga aur Charu, stay tuned to this space.