Episode begins with Preeta says she knows that Prithvi would have threatened Krithika to marry him or would have married her forcefully. She says now Krithika need not to be afraid of Prithvi because her family is with her so she need not to accept this marriage.

Sherlyn moves towards her room and Mahira follows her. Sherlyn breaks all the things and cries. Mahira asks Sherlyn to calm down. Sherlyn says Prithvi said he loved her but without thinking about her he married Krithika. She says she married Rishab because of him and she is pregnant becauseof him but he married Krithika. She says she never thought about her and did everything for him but at end he betrayed her. Mahira tells Sherlyn to control herself.

Sherlyn asks her to not say anything because this is how Mahira reacted when Karan married Preeta and says she loves Prithvi so she will tell the truth to everyone and was about to go but Mahira stops her and says there must be some reason behind this marriage. Sherlyn says Mahira doesn’t know what kind of person Prithvi is only she knows him and says he is father of her child but he married Krithika. Mahira says first they will know what happened then they will decide what to do next.

Kareena asks Krithika that why she married Prithvi. Krithika says her marriage happened in Chandigarh and says she wanted to go to mela so Uncle gave permission to her. She says few guys troubled her in mela. Karan asks why she didn’t call him. She says she was in Chandigarh so how can he save her.

When Prithvi tried to interrupt, Karan warns him to not interfere. Prithvi says now he is also their family member. Karan says he knows what all Prithvi said to Preeta and tells him to shut up. Krithika says she only told Prithvi to inform her family about their marriage. Prithvi says no one picked the call that’s why he called Preeta.

Krithika says Preeta has past history with Prithvi and she can understand that why Preeta is angry with this marriage. Karan says her mind is not working and asks how can she marry one thief to escape from another thief. Prithvi says he also faced the situation like Krithika that’s why they are made for each other.

Krithika says those guys tried to molest her and Prithvi saved her from them. She says she didn’t expected that he will save her like this. He said that he will drop her and those guys returned again with Goons. Goon was about to stab Prithvi. Prithvi stops him and says he will apologize but tricks him and escapes from there with Krithika. Dadi asks just because he saved her that’s not mean she should marry him. 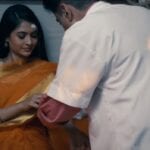 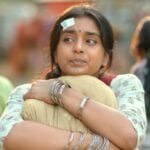